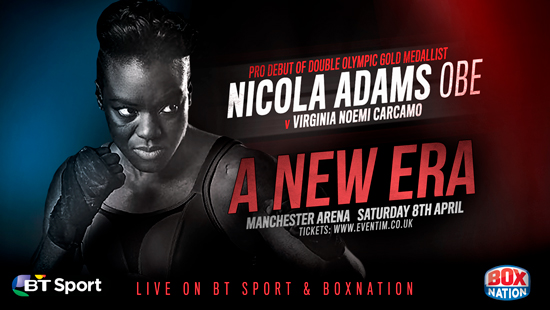 During what can be considered one of the most successful ever amateur careers for any female or male boxer, Adams secured a clean sweep of amateur titles winning every available accolade.

After a breath-taking amateur career, the hugely popular Double Olympic Gold Medallist will now embark on the next chapter of her remarkable story under the guidance of Hall of Fame promoter Frank Warren; starting with a four round Flyweight contest against Carcamo on Saturday 8th April.

Carcamo, 32, has won four of her seven bouts, losing two and drawing one. Nicknamed ‘La Tigresa’, she has racked up 32 rounds under her belt since making her professional debut against Silvia Moreno in 2015. This will be her first time fighting outside of her homeland.

“Now that my first opponent has been announced, all I want to do is get in the ring – I’m so excited for my first fight,” said Adams. “Training with Virgil Hunter has been amazing, he’s taught me some great new things for my professional debut.

“All my focus is on Saturday 8th April and the road to becoming a World Champion. Together with Frank Warren, BT Sport and BoxNation we’re going to take women’s boxing to the next level”