Dr Wu cornered over his pro con in Olympic Games

Most will concur that last weekend’s Frampton-Quigg damp squib wasn’t the fight of the year it was built up to be. But I’ll tell you what might be.

Seconds out for a declaration war between the World Boxing Council (WBC) and the International Boxing Federation (AIBA) over the latter’s scandalous proposal to allow top pros to box in the Olympic Games.

The WBC’s president Mauricio Sulaiman , son of the late, legendary ‘no way Jose’ is outraged, and rightly so, saying that AIBA’s ultra-ambitious overlord Dr C K Wu, he who would rule the entire boxing world, has gone too far this time.

I could not agree more. As both Frank Warren and I wrote here last week, it is not only daft, but dangerous. A recipe for disaster.

Sulaiman expresses “deep concerned about the shameful stage AIBA has reached in the entire history of Olympic boxing.

“AIBA has reached rock bottom because it seems their leadership does not have a clue of what boxing really means and represents. AIBA’s priority appears to be the commercial and business aspects of the sport.

“AIBA is showing that it does not seem to care about the physical well-being of the fighters or the correct practice of the sport around the world.”

Sulaiman claims there is a lot of ignorance and lack on information of what is happening in amateur (now officially re-named “Open” boxing and  accuses AIBA of ruling by authoritarian imposition and abusing its powers.

I understand the WBC he will now extend plans already in place for institute their own ‘amateur’ programme, which could lead to an embarrassing breakaway from AIBA.

It will be interesting to see whether in view of all the hostile reaction to Wu’s Games plan the International Olympic Committee will ko the idea, as they should.

And Wu’s new best friend, the bandwagoning homophobe Manny Pacquiao, suggesting he might happily take part in the Rio boxing tournament if invited (thus depriving of a genuine young Filipino prospect of a place) is simply helping to create a circus out of the Olympic rings.

And how’s this for hypocrisy and double standards? Dr Wu wants pro boxers in the ring, but his organisation still till won’t allow coaches who work with professionals –like Team GB’’s Rob McCracken – in the corner

Wonder if Donald Trump, boxing buff and putative US presidential,candidate, will show up at the Las Vegas ringside for the upcoming superfight between Saul ‘Canelo’ Alvarez and Britain’s Amir Khan?

This brings together a Mexican and a Muslim, the two entities Trump says he would ban from entering America if he ever becomes president.

The irony is obviously not lost on Golden Boy promoter Oscar de la Hoya who mischievously claims he actually organised the bout in protest after hearing Trump’s opinions on Muslims and Mexicans.

“I was watching Donald Trump speaking his nonsense, and I said to myself: ‘Why don’t I put a Muslim fighter and a Mexican fighter in the same ring and create a mega event on Cinco de Mayo week, just to show Trump.’”

Well, it’s a good ticket-selling line, though I doubt its true.

An intriguing thought, nonetheless. Trump loves his boxing and is brass-necked enough to show up on May 7,the week of thje big Mexican festival.

The current frontrunner among the Republican Party’s candidates for the White House has called for a ban on Muslims entering the United States and for a wall to be built on the country’s border with Mexico.

“It’s mindboggling to know that he has those types of philosophies and thoughts,” De La Hoya , himself of Mexican descent, told CNN after admitting he had once played a round of golf with Dodgy Don.

Now Joe’s was a masterclass

Masterclass was a word bandied about by a couple of fellow scribes after the super-bantanweight unification bout in Manchester.

They must be joking. But it did remind me that a true masterclass by British boxer came exactly ten years ago last week in the same arena week when Joe Calzaghe boxed the backside off the reputedly unbeaten American Jeff Lacy, hailed as the next Mike Tyson.

“I have never seen a better performance than that in the world,” declared Lacy’s trainer Dan Birmingham after of a career-degfining fight in which WBO super-middleweight Calzaghe threw an incredible 1,006 punches . 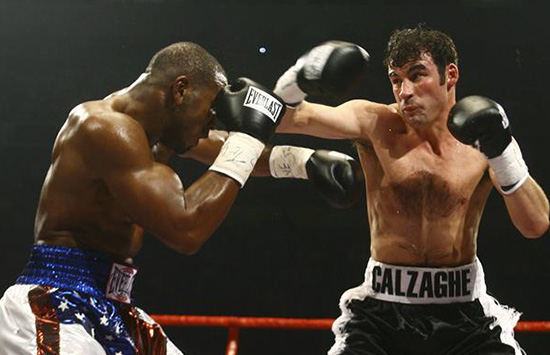 “That for me was the best performance by a British boxer that I have been involved with,” said promoter Frank Warren. “He took him to school.”

Yes, indeed. Now that for me really was a masterclass.

The only guy that’s got my respect is Jazza Dickens – let’s make no excuses. Frampton, are you ready?

Guillermo Rigondeaux, who Carl Frampton has been ordered to meet by July 17 or vacate his newly-won WBA title

Big fights nearly always let boxing fans down, it was a snooze-fest through nine. Thousands of fans have paid a lot of money for this shit… absolute bollocks. Pleased I left and came home.

What Tyson Fury wrote on social media after walking out on the Frampton-Quigg fight.

Big brother Floyd Mayweather is gone, everyone else is too boring, so I’m taking over the sport.

Ever-bombastic Adrien Broner , who is due to fight Britain’s Ashley Theopane, wonders why everybody calls him Big ‘Ead.

Famous last words from Floyd Mayweather jnr on whether he plans to ‘unretire’ or box in the Olympics.

There ain’t no differences between us. There’s truth in Christianity, Islam, Buddhism, Judaism, all religions…the only religion that matters is the real religion – love.

What Muhammad Ali told his friend and biographer Davis Miller.

I don’t ejaculate for six weeks prior to a fight, so there’s a bit of a build-up there. I know my opponent hasn’t sacrificed like that, so it gives me that mental edge over my opponent.

Too much information from David Haye.

Tomorrow: The Big Interview with Kevin Satchell – ‘this is my year for a world title.’