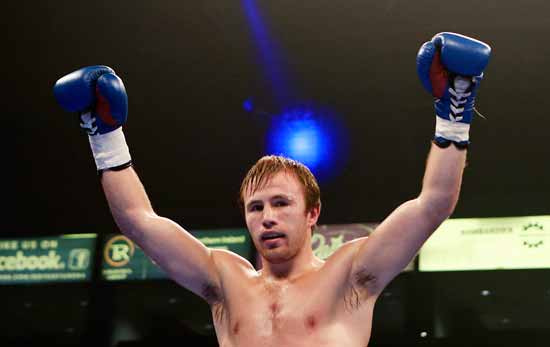 The 27 year old Dubliner confronts Welsh star Chris Jenkins in a crossroads cracker that has Fight of the Night written through its core.

When did you first realise you were blessed with a knockout punch?

Me Da’ says I could always punch from taking me on the pads when I was a real nipper but I stopped boxing when I was about 11 then returned when I was 16.

I think I’ve always had a high level of natural power but it was only once I was shown how to settle, that it started to pay dividends. As an amateur, I usually had to spar heavier boys but I could hurt most of them. I’ve decked plenty in the gym and I can do it with either hand, from either stance. One or two were out cold.

The year I won the Irish Seniors, I stopped every opponent and I was only 19 years old. I believe I’m the only boxer to have done that. If I land clean, I seldom need a second shot. Once I’ve banjoed them, the ref usually steps in and stops it.

You’ve been trained from dot by your father Philip Snr, who represented Ireland at both the 1980 (Moscow) and 1984 (Los Angeles) Olympics, and twice medalled at the European Seniors (1977 and 1979). How does that relationship work?

Grand. Me and Da’ have a great relationship. He never went pro himself but he knows the game inside out and he knows me inside out. He’s a great pad man, sets good plans and is a great motivator without always knowing it.  If he’s in the gym when I’m doing bag or ground work and I know he could be watching, I push myself extra hard.

After a glittering amateur career, you’ve been pro for over three and half years now. How do you assess your progress?

It started fantastic and I had five fights in Ireland in my first eight months as a pro. But then I had almost a year out injured. In 2014 I had an op on my right hand which had really been restricting me.
The hand’s grand now but it’s been pretty slow since I returned, very difficult to secure fights. Opponents were demanding UFC money to fight me! Due to the inactivity, my joints and tendons swell up, causing minor temporary problems.

But I recently signed with the MGM crew in Marbella. They promised me meaningful fights and they’ve quickly delivered.

Hopefully, if I come through in style on Saturday – and I expect to – I can be moved along pretty quickly. I’m getting promised big things by the right people. MGM have a good track record of achieving titles for their fighters.

The only stain on your 12 fight pro slate was a majority decision loss to unbeaten Swedish Olympian Anthony Yigit over in Hamburg, Germany six months ago. What’s the story?

To lose by a point in Germany, to their boy on their show tells you all you need to know. I only had a week and a half’s notice. With a full camp, I swear he’d not last six rounds with me.

I’m a hard critic on myself and I didn’t do enough, well, not as much as I could. The eight rounds were over so quick. Sky said it could’ve gone either way but I definitely felt I deserved the nod.

I’m hearing whispers that Yigit is soon going to be fighting Lenny Daws for the vacant EBU (European).
I’d batter either of them but I hope Ant wins cos I’d love another crack at him.

I’d happily accommodate him back in Germany on a full eight week camp. The judges won’t be required.

After four fights overseas, you must be delighted for this opportunity to showcase your skills back in the Emerald Isle, particularly given that it promises to be a tight one.

Honestly, it makes no odds to me where I fight but Belfast is just up the road and the fans up there are proper boxing people, just like the Dubs. They enjoy the fights. I’d say it’s going to be a good night.

On Saturday, you not only step up to 10 round level but, in ex Prizefighter and WBC International champ Chris Jenkins, you face easily your stiffest test. He’s been 12 rounds twice, 10 rounds once. You’ve yet to venture past round eight. Is that a worry if you don’t dispatch him early?

Not at all. I’ve done tens and 12s several times in sparring at the Crumlin Boxing Club. Recently I did 10 straight off at a great pace with Tommy Coyle, a tough boy with balls of steel.

This is a fight to get my career going. I’m still not sure if there’s a title on the line but I’m just happy to be moving up to 10 round level against a fighter of Chris’s calibre. I’m so happy he took the fight.

What specific challenges do you see Jenkins setting?

I’ve studied six or eight of his fights. He’s got a good jab, a good engine and seems pretty clever between the ropes. I thought he was hard done by in the second British title fight with Tyrone Nurse. He’s a busy fighter, comes forward, but that should suit me.

We don’t know how Chris will come out but it really doesn’t matter. Can he stay with my pace? I hope to deliver a pleasing fight for the BoxNation viewers. If I catch him sweet, he could ‘go’ early.

The bookies have it as ‘pick ‘em’. What do you believe tips the balance in your favour?

People are talking 50-50 fight which generates interest but I don’t view it as 50-50. I can box orthodox or southpaw, forward or backward, go left or right, move around ya. I can do ten times more things in the ring than Jenkins can and I definitely punch a lot harder.

We all know styles make fights and Chris Jenkins has a style that’ll really suit my style. I’d say we’re evenly matched on paper but I guarantee I’ll want it more.