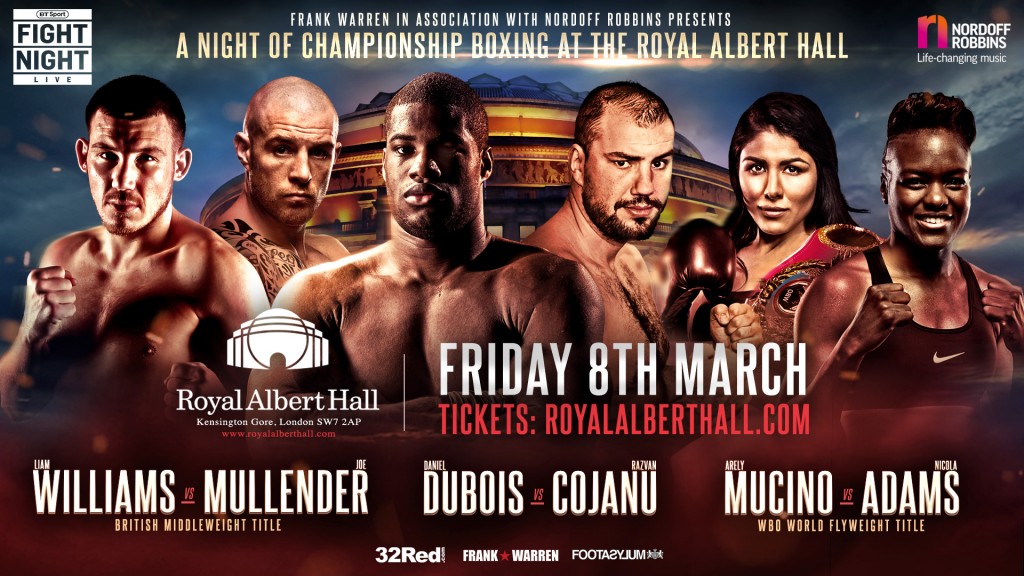 The iconic venue has previously staged some of the best fights in British boxing history. Only one professional boxing show has been staged at the Albert Hall in the last nearly 20 years, the occasion being when Billy Joe Saunders fought Tony Hill for the vacant Commonwealth title in April 2012.

Sharing top billing will be star in the making, Dubois, who faces his toughest test to date in the shape of Romanian giant Razvan Cojanu.

The 31-year-old former world title challenger extended Dubois’ domestic rival Nathan Gorman to the full 12 round distance in December, having originally been scheduled to fight the young Londoner a week previously before Dubois succumbed to illness.

The 16-5 Cojanu has operated at the highest level and in 2017 he challenged Joseph Parker for the WBO world heavyweight title and faced Luis Ortiz in July of last year.

“The chance to fight at the Royal Albert Hall is a huge thrill for me and I really hope it is the first of many opportunities to perform there,” said the 21-year-old. “I am fully aware that many of the British heavyweight greats of the past fought at this historic venue and it will be an honour to follow in the footsteps of the likes of Henry Cooper, Frank Bruno and Lennox Lewis.

“I know the Albert Hall was the favourite place to watch boxing for many older fans so it is brilliant that a new generation will now get the chance to sample the experience too.”

It is fitting that British sporting royalty in Nicola Adams will bid for her crowning moment at the South Kensington concert hall that was opened by Queen Victoria in 1871 and first staged a boxing competition in 1918.

Adams will challenge the WBO world flyweight champion Arely Mucino, having won the Interim world title in October with a clear cut points victory over Isabel Millan in her fifth professional fight.

“Winning a world title is what I got into professional boxing for and I believe it is my destiny to do so and ultimately unify the flyweight division,” stated the two-time Olympic gold medallist. “To get this opportunity after just five professional fights is an achievement in itself and I am so thankful to my promotional team for making it happen.

“To fight for the WBO world title at the Royal Albert Hall is a dream come true when you consider the great names that have performed there and I want to make this another memorable occasion.”

The 29-year-old Mexican Mucino holds a record of 27-3-2 and is a three-time world champion, winning the IBF title in 2011 and successfully defending three times before losing a challenge for the WBC belt in 2012.

Mucino won the WBO title in February of last year with a majority decision over Monserrat Alarcon before overcoming Maria Salinas via a split decision in September.

Also on the bill, in what is surely guaranteed to be an all-action encounter, Liam Williams will make a first defence of his British middleweight title against former English champion Joe Mullender.

Williams was hugely impressive in stepping up to middleweight to stop the previously unbeaten Mark Heffron in December to become a two-weight British champion and he now defends the belt against the 11-2 Mullender, who recorded a brutal stoppage victory over Ben Capps last time out in October.

“I think this has got all the makings of an exciting fight and you can see from his style that he always brings it and comes to have a good tear up, so I am looking forward to it,” commented the 19-2-1 Welshman.

“I do believe I am a class or two above him to be quite honest, but I also think he will give anyone a decent fight because of his style. He would give most fighters in the world a good fight, however long it lasts, because of the way he approaches fights.”

The Brentwood man, known as ‘Smokin Joe’ won the English title in an epic sequel against Lee Markham in June 2017.

“For me it is all about the British title and I will fight anyone,” insisted the hugely popular 32-year-old. I respect Liam as a fighter, he has done what he’s done and is levels above me on paper, but I don’t really care who I fight, to be honest.

“It is for the British title and the odds are stacked against me, but that is what I like.”

Johnny Garton, who won the British welterweight title in a thriller against Gary Corcoran in October features on the card, along with Archie Sharp (14-0) making a first defence of his WBO European super featherweight title against the also unbeaten Lucas Ballingall (11-0).

Tickets are priced from £40. A pre-sale open to members of the Royal Albert Hall’s Friends and Patrons scheme is open from noon on Thursday 17 January, with tickets on general sale from noon on Friday 18 January via RoyalAlbertHall.com