DUBOIS DOES THE BUSINESS 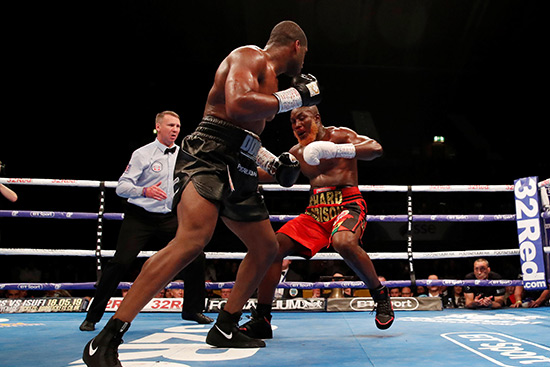 THERE WERE A couple of points on Saturday night at Wembley during Daniel Dubois‘ ferocious exchanges with Richard Lartey when it was like watching Warrington v Frampton all over again.

It is not something we are particularly accustomed to with the heavyweights, where both of them enter into a frantic swing-off. It is because it normally ends in one way and that is southbound towards the canvas.

It made for great entertainment though and I think any questions over Daniel’s chin and what will happen when he takes a splosh on the whiskers have pretty much been answered.

I must give great credit to Lartey for playing his part in a smashing fight. He came in very fit, well prepared, in excellent physical condition and he came to win.

It was a fight Daniel will learn so much from. We know what he has got in a brilliant jab, powerful straight shots and nice combinations, but now we have seen him get involved and I have got no problem with that because it happens in fights and he will take a lot from it.

When he did take a couple of big shots he showed what he is about, displayed no signs of distress and just fired back.

It may sound a strange thing to say, but Daniel will take great experience from showing inexperience. I also noticed much more variety in his work and this has come about from the Kevin Johnson fight where he was a little bit repetitive in his work.

He is demonstrating that he is taking things on-board while he is a work in progress and a few more boxes were ticked for me in terms of his development.

There are now exciting times ahead for our heavyweights and we will be making some big announcements next week regarding Daniel, Joe Joyce and Nathan Gorman.

Nathan might well have been feeling a little bit overlooked last week, what with Daniel fighting and news of Joe being added to our ranks. Believe me, I rate Nathan so highly and he is going to play a huge part in our heavyweight planning, the next phase of which will be revealed shortly.

Nathan’s turn in the spotlight is coming.

Before our frenetic heavyweight top of the bill came a cool, calm and collected exhibition of pure boxing from our super middleweight Lerrone Richards, who outfoxed the very capable campaigner Tommy Langford to win the Commonwealth title. 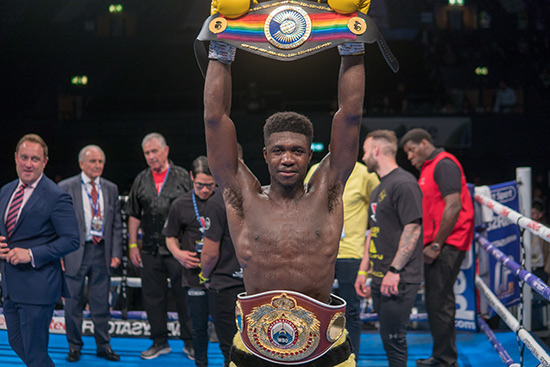 Lerrone has been out of action for a year following a shoulder injury, so to put on a masterclass like that was really something and against an opponent with good credentials. The BT Sport viewers were impressed with what they saw and the feedback on Lerrone has been overwhelmingly positive.

My one observation would be that I think Lerrone could have stopped Tommy if he had stepped up his work a bit sooner, but you have to make allowances for his time out of the ring.

He will know himself what he’s got to improve on and I hope he does it because the quality of his opposition will be increased from now on and he will have to deliver in order to go from strength to strength.

I heard Sunny Edwards and his brother Charlie being labelled as the Croydon Klitschkos last week. The way Sunny is impressing these days I think we might have to call him Little Lomachenko!

He just looks such a top quality little fighter – almost punch-perfect in what he does. Sunny has got a swagger to him, but he is not short on substance either and his popularity will grow with more performances like on Saturday night. 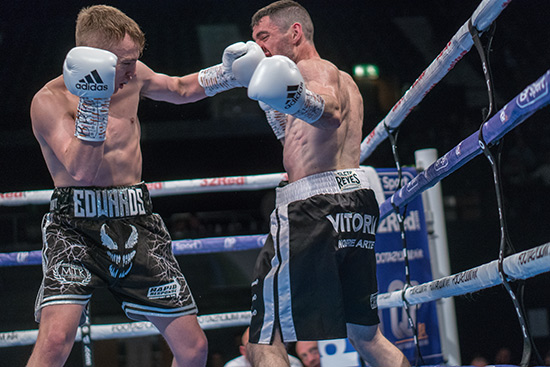 Sunny is properly up and running now and next stop for him will be our big show at the 02 Arena in July.

Another with big fights in front of him is Zak Chelli, a fearless operator who just wants to be in big fights at the age of just 21 with only seven fights on the clock.

He has got a first title now in the Southern Area belt and it didn’t surprise me to learn that he called for the winner out of Lerrone and Tommy Langford. That would be a real basher v boxer match-up that I would happily put together if they both fancy it.

Jack Catterall was his usual classy and efficient self on Saturday and now he just has to play the waiting game for a little bit before the WBO order his world title challenge, which hopefully won’t be too long and then I am confident we will have another world champion.

There were also some impressive displays from the youngsters on the undercard and it is only a matter of time before these guys move into the television slots themselves and showcase their talents to a wider audience.