DUBOIS: THE BEST IS YET TO COME 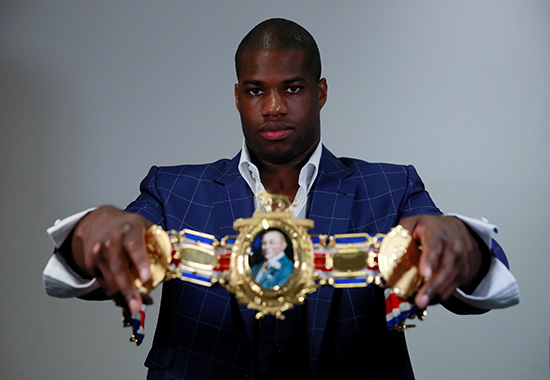 DANIEL DUBOIS is promising ‘another devastating performance’ when he takes to the ring at London’s Royal Albert Hall on Friday September 27 with the vacant Commonwealth heavyweight title on the line. Tickets went on sale today (Fri Aug 9) for the clash between Dubois and unbeaten Ebenezer Tetteh, subject to the Ghanaian winning a warm-up this weekend with WBO world flyweight champion Nicola Adams also featuring on the bill, live on BT Sport. Dubois enters into his 13th professional fight against Tetteh – competing for his seventh title — and comes into the fight off the back of his spectacular demolition of domestic rival Nathan Gorman last time out when he claimed the British title Defeating Gorman, Dubois believes, has increased his stock ahead of his next title assignment and his slightly longer-term aim of breaking into the elite band of heavyweights. “It is like getting back to the drawing board now with this next fight and getting ready for this next date and seeing what’s what,” considered the 21-year-old. “The last fight boosted my profile and a lot of people tuned in. It was special in that regard, with a lot of people watching with their own opinions on who would win. It builds exposure for me and grows my profile, so I’m glad I got that one done. “The best is still yet to come and I’ve a whole lot more to give. “I’m not too far away from the big boys and breaking into that league. I am very focused right now, determined to push on and not let anything hold me back. “Whoever I’ve got to beat, I will beat,” explained Dubois by way of a mission statement before adding his thoughts on forthcoming opponent Tetteh, who holds a record of 19-0 with 16 of the wins coming via KO. “It is going to be interesting and I am confident I will come out with the victory. I am at the stage where I am only getting better and in this fight I might show something a little different that boxing fans haven’t seen before. “This is the fight business and we are in the fighting game, so when the guy has got two gloves on and is swinging with all his might, I think there is enough danger in that already. “It is obviously a prestigious title on the line so I have got to approach it seriously because he will be trying his best. I’ve got to make myself ready. “It is going to be buzzing again and I am sure it is going to be an amazing night of boxing. I am looking forward to putting on a show at the Royal Albert Hall. “It is going to be another devastating performance from me.” Beside’s Dubois and a world title clash involving Adams the show will also feature WBO European super-featherweight champion Archie Sharp, middleweight banger Denzel Bentley, heavyweight Jonathan Palata, lightweight Mohammad Bilal Ali and precocious bantamweight talent Dennis McCann. Exciting prospects Lewis Edmundson, Eithan James and Sam Noakes all make their professional debuts 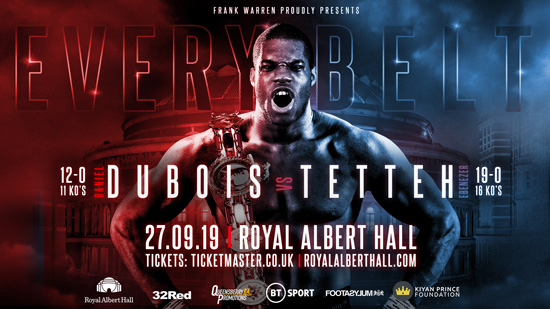 Tickets for the September 27 bill at the Royal Albert Hall are available to purchase from www.ticketmaster.co.uk and www.royalalberthall.com. Prices £40, £50, £75, £100, £150 Ringside.