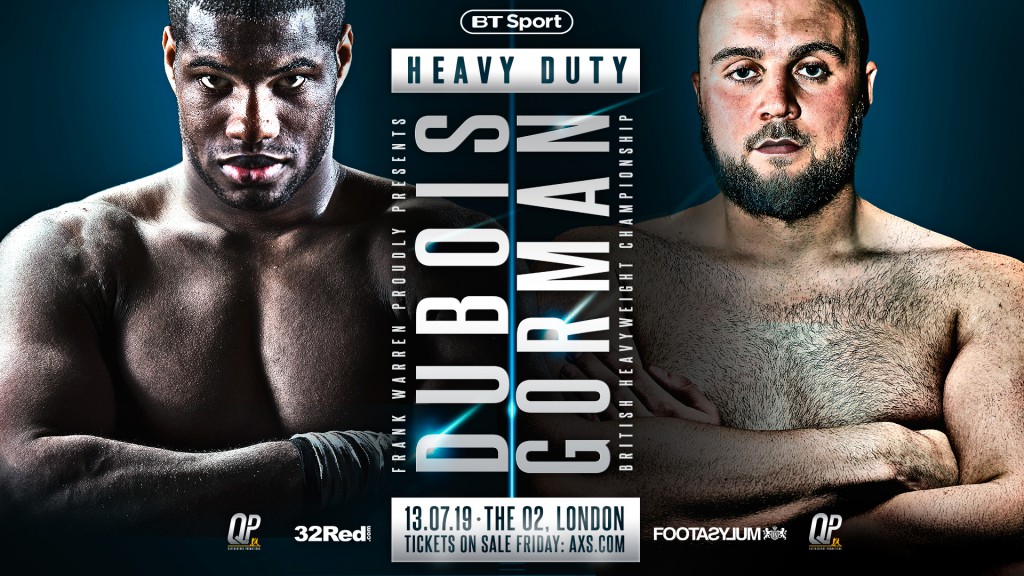 Unbeaten British heavyweights Nathan Gorman and Daniel Dubois will fight for the vacant British heavyweight title on what will be a huge night of boxing at The O2, London on Saturday July 13 live and exclusive on BT Sport. The card will also feature unbeaten Olympic silver medallist Joe Joyce MBE.

Just 21 and 22 respectively, Dubois and Gorman are recognised as two of the top young heavyweights in world boxing and the pair will now put their perfect professional records on the line with the coveted Lord Lonsdale belt at stake.

In a fight that bucks the trend of unbeaten boxers avoiding each other, Dubois v Gorman is the domestic heavyweight dust up that the fans have been crying out for. The O2, London is the place to be to watch it all unfold on July 13, a night of boxing that will be broadcast live and exclusive on BT Sport.

Dubois, for his part, insisted he had absolutely no reservations over accepting a marquee domestic encounter at this early stage of his development.

“As I have always said, whoever is put in front of me I have to go through them and that is what I have done so far.”

“As I proved in my last fight, I want to bring excitement to the heavyweight division for the fans and I promise it will be another explosive night on July 13th.

“I am very confident that I can knock anyone in the world out right now.”

“I would have fought Joe Joyce and now I will fight Gorman. I am confident in my own ability that I can deal with everyone out there and I’ve got what it takes to beat them.

“I believe I am way ahead and better than Gorman and on fight night I will prove it.

“There is no way he will stop me. I accepted this fight straight away and when Frank (promoter Warren) told me about it, it was on.”

Gorman, meanwhile, revealed his surprise that a fight that was tipped to take place at the end of the year or beyond has now become a summer showdown that he didn’t anticipate his heavyweight rival signing up for.

“I am very surprised, to be fair,” he confessed. “I was probably expecting it to be next year – in the summer time probably – and that is what I thought. When the phone call came it took me only a matter of seconds to say yes so it is nearly here now and only a couple of months away.

“I’m over the moon we’ve got the fight on. Fair play to Daniel, I didn’t think he would have accepted it, but he is obviously as keen as I am to fight. There should be plenty of excitement and a I’m sure the fans will love it.

“I can’t see it going 12 rounds and the plan is to go in there and stop him. The winner out of me and Daniel will proceed onto world honours, I’d imagine. The British title will propel you to the world stage.

“It is good for the fans to see the best prospects like me and Daniel fight each other. You can overcook a fight and I think we have now got it at the right time, I really do.

Hall of fame promoter Frank Warren added: “This is a mouth-watering big punching confrontation between two unbeaten young gladiators who have total self-belief in their respective talent.

“At a time that the heavyweight scene’s big three players are fighting in the States, the next generation are taking the stage at The O2 in London at prime time on BT Sport.

“Daniel Dubois and Nathan Gorman duke it out for the vacant British Heavyweight Title while Britain’s Olympic silver medalist Joe Joyce will be looking to show why he was calling for that Anthony Joshua fight last month!

“Between these three giants they have 35 wins and are undefeated so you know this is heavyweight boxing at its best with fireworks guaranteed!

Joe has a big fight on May 18th against the Russian giant Alexander Ustinov that he has to focus on. We are working with Joe’s team to find the right opponent to secure him a big fight on this fantastic night of heavyweight boxing.

Tickets for ‘Heavy Duty’ featuring Daniel Dubois v Nathan Gorman for the vacant British Heavyweight Title, plus Olympic silver medalist go on sale at 12pm on Friday 10th May via AXS.com, Eventim and Ticketmaster and will be priced as below: