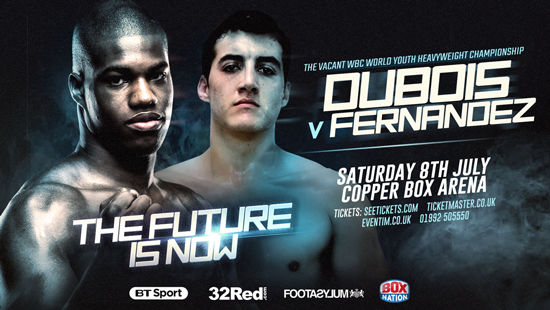 Teen Heavyweight sensation Daniel Dubois will fight for his first professional title in only his fourth fight when he takes on Mexico’s Julian Fernandez for the Vacant WBC World Youth Heavyweight strap at the Copper Box Arena on Saturday 8th July, live on BT Sport and BoxNation.

Dubois made a sensational start to his professional career by demolishing Marcus Kelly in just 35 seconds at the Manchester Arena. The Peacock Gym giant then blasted out former Olympian and Commonwealth Games Bronze Medallist Blaise Mendouo at the Leicester Arena before racking up another devastating first round KO against Dave Howe at the Copper Box Arena.

Undefeated Fernandez has raced to five professional wins since turning professional at the end on 2016. Three of his wins have come via knockout and the man from Tijuana has racked up eleven rounds, compared to 19-year-old Dubois’ four rounds.

“I’m coming for all of the belts,” said Dubois. “I have a chance to make a big statement by winning my first professional title in only fourth fight. Fernandez is another opponent with an unbeaten record and will be coming over here determined to win the belt.

“Looking at the current Heavyweight scene, I know I can go out there and make my mark. Winning the WBC World Youth strap will prove that I am one of the very best Heavyweight prospects in the World.

“This has been planned since I was five years old and it really has gone to plan. I’m working hard towards being the best the I can possibly be and I’m feeling good. I’ve worked very hard on my physical strength and that’s showing now.

“I’ve heard it has been very difficult finding me an opponent. Not a lot of guys want to get in the ring with me, I must be doing something right! There is still a long way to go, but I believe I will be number one in the World some day soon.”

Promoter Frank Warren said: “Daniel is one of the best, if not the best, young Heavyweight prospects in the World today. The fact that he is fighting for his first professional title in only his fourth fight tells you everything you need to know about his talent and determination.

“This is only the beginning of a long and exciting journey for Daniel and I am confident Saturday’s belt will be the first of many. There is a huge buzz around him at the moment and I think the fans will be in for another treat on Saturday.”