Indian superstar Vijender Singh got his professional career off to an explosive start with a third round stoppage of Sonny Whiting at the Manchester Arena.

Singh made a successful transition following a highly successful amateur career winning the Bronze medal at the 2008 Olympics and now aims to become India’s first ever professional world champion. 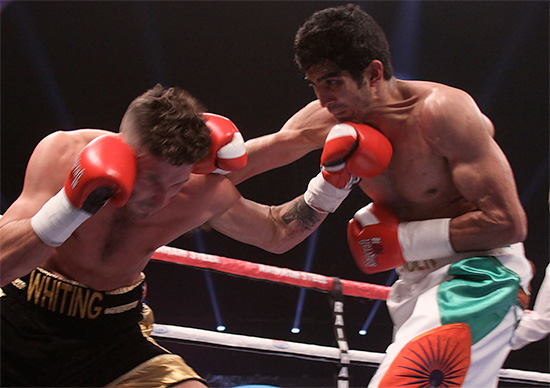 He got off to a great start utilising a hard jab and heavy right hand mixed with some hurtful body punching that had Whiting on the back foot.  As Singh warmed into the fight he started to hurt Whiting to the body and found the opening for his big overhand right.  In the third, Whiting was slowing down from the constant heavy shots and Singh went on the attack, unleashing a brutal four-punch combination with the referee stepping in to halt the action at 2:08 of the round.

With the fight going out live in the UK on BoxNation and to India on Sony Six in front of an estimated 20m audience, a thrilled Singh said afterwards, “That was a great start to my career and I could of hoped for it to go any better,”

“There was a lot of pressure on me with all of India watching me live on TV so I knew that I had to win so I just went for it and the result came,”

“I knew that I was hurting him with my punches and it was only a matter of time before I got to him and in third round I got to him with a beautiful heavy combination and the referee stepped in,”

“This is just the beginning for me so I’m not getting carried away. I’ve got so much to learn in the professionals and there is a long way to yet,”

Singh’s second fight has already been confirmed and he will head to the Harrow Sports Centre in North-West London on Friday 30th November.”

He added, “There is no time to rest, no vacation, I’m now excited to be having my second fight already, it will be on Friday 30th October at the Harrow Sports Centre in London and you will see more improvements from me.”

Francis Warren said, “That was a fantastic performance by Vijender in his debut and there is much more to come from him as he develops.  It backs what I’ve said all along in that we have a real star on our hands and with 20 million people watching in India that can’t of failed to excite.  Now all the hype around his debut has settled down he can develop at his own pace and I think we’ll see even more from him in Harrow on 30th October.”

Early Results from the Manchester Arena: