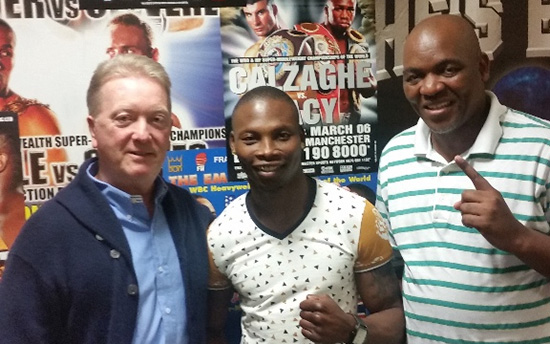 Tete, from Mdantsane in the Eastern Cape, is one of the most explosive punchers in the division with a 18 knockouts in 22 wins and 12 of them coming inside the first round.
The 27-year-old southpaw is well remembered in the UK for his eighth round knockout of then unbeaten Ellesmere Port ace Paul Butler in March this year in an IBF World title defence.
Since then he’s vacated the title and notched up two further wins, smashing Diuhl Olguin in eight round in September and then outpointing Jether Oliva over twelve rounds, only a few days ago, to capture the WBO Africa title.
All-action Tete is excited to join Warren and believes that the Hall of Fame Promoter will be the man to guide him in his quest of becoming not only a two-time world champion, but also a multi-weight world champion
“I’m very excited to sign with Mr. Warren who’s international reputation and expertise is second to none and I believe that he is the man to put my trust and faith into with my career,” Said Tete.
“My ambition is to win another world title at super-flyweight and I will then move up to bantamweight and do the same there, and I could even move on to super-bantamweight, with Mr. Warren’s guidance my opportunities are endless and I look forward to a great 2016 with him,”
“My first fight under his promotion will be very soon and as the English fans’ have seen I bring a big punch and excitement every time I fight, I can’t wait to thrill the fans’ again.”
Warren has promoted many of the great African fighters in his four decades as a promoter, including world champions Baby Jake Matlala, Harry Simon, Sugar Boy Malinga and the legendary Azumah Nelson, is delighted to now be promoting a future great in Tete.
“Zolani is a world class operator and I’m absolutely delighted that he’s signed with me and look forward to working with his team,” Said Warren.
“I’ve promoted many great African fighters over the years, legends of the sport like Nelson, I had many great nights with Malinga and also Simon, I believe that Zolani could join them as a great fighter in his own right,”
“There are big plans for him next year, he could still fight at super-flyweight and there are also exciting options for him at bantamweight, he’ll soon be fighting for world titles.”
Tete’s manager Mlandeli Tengimfene is thrilled to join Warren, he said, “I believe that Zolani will be taken to a who new level by Mr. Warren and that is what he needs,”
“He’s a world class fighter and he needs world class promotion and that is what Mr. Warren is a specialist in so we are excited to be working with him, no one can do a better job,”
“Zolani is very very happy and now we will get to see the very best of him as he embarks on a very ambitious plan of winning world titles in different weights and mark himself as one of the greats from our continent.”