Ear-we-go! The Holy Warrior is back on his feet

This time three years ago Evander Holyfield was out on his feet. On his uppers, so to speak. Flat broke and finished as a fighter.

True, just short of his 50th birthday, he still dreamt of becoming a world heavyweight champion for the sixth time. “I’ve still got hope,” he was assuring everyone at the time. 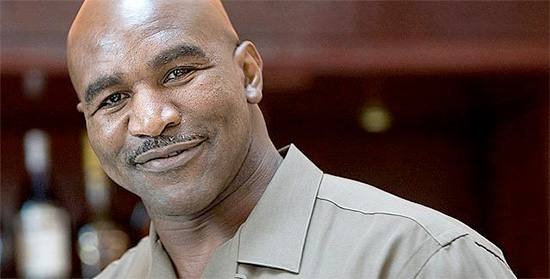 But what he didn’t have was have was money, despite banking £350 million, half of it from his 57 fights, in his 28-year career.

The “Real Deal”, one of the greatest fighters of all time, was bankrupt and having to sell everything except his soul to pay off debts which amounted to over £10m. Virtually his whole life went under the hammer at a Beverley Hills auction house in what was believed to be the world’s biggest sale of sporting memorabilia.

Even by boxing’s sometimes depressing standards Holyfield’s road to ruin has been spectacular, a fortune lost in the casinos of Las Vegas and Atlantic City, business misadventures, crippling lawsuits and lavish spending on a lifestyle as much that of a champion philanderer as pugilist.

He had been divorced three times, with 11 children by five different women and owed half a million dollars in child support.

He was also evicted from his 109-room Atlanta mansion, owing $14m in mortgage repayments. It was sold at a knockdown price of $7.5m to keep the banks off his back. He lived alone in a downtown condominium.

Holyfield’s financial woes started in 1999 when his then wife of two years, Janice, filed for divorce after he had publicly admitted to fathering two children out of wedlock.

“These are difficult days,” Holyfield admitted.. “Dealing with all the mothers of all my kids – there ain’t no winning here, man, no winning at all. I’ve had no money to pay lawyers and had to fight on my own in court and that ain’t easy.”

His gloves, boots and robe from that infamous encounter were up for sale at Julien’s, the US equivalent of Sotheby’s, on 30 November 2012 along with jewellery, furniture and more ring memorabilia, including 27 other pairs of gloves, his Olympic bronze medal, world title belts and what he says is his most prized possession, a 1962 red Chevrolet Corvette speedster, the same vintage as himself.

The only item not for sale appeared to be the piece of ear gnawed off by Tyson, part of which had been sewn back on.

He was so strapped for cash that he still harboured ambitions of ring glory, convincing himself he was on a crusade to end the heavyweight dominance of the Klitschkos. This was despite being banned by the New York Commission and other US states because of concerns about his health.

He was once diagnosed with a heart condition which caused him to retire temporarily, and there were – and still are – disturbing portents of incipient brain damage. His speech is slurred and his reflexes are slow. There were also persistent but unproven rumours that Holyfield’s famously muscled physique has been maintained with the assistance of steroids.

But that was three years back. Fortunately things have taken a turn for the better for one of the bravest ever to wear the heavyweight crown.

The deeply religious Holy Warrior is back on his feet again, having re-invented himself as a man-about-boxing, earning a decent crust as a pundit and in-demand personality, even collecting a few commercial endorsements along the way,

One of them is his own brand of barbecue sauce, manufactured in two flavours: mild and hot. The Real Deal has become the Meal Deal. Not quite in the George Foreman Grill league, but its a start.

“Maybe my ear would have tasted better for Mike Tyson had I smeared some on it” Holyfield jokes.

“Losing everything was hard,” he now declares. “The only way I got through it was to think ‘God allowed me to have that house, he’ll allow me to have another one. The Bible says ‘the second half of your life is going to be better than the first half’. I made $230m in the first half, so I’ve still got reasons to live.”

His ring career is certainly something to look back on with pride. He may not have been the greatest of heavyweight champs, nor the most charismatic. Someone wrote that he was about out as exciting to watch as bread pudding. But he had heart and passion, a blown-up cruiserweight who went on to mix it with the big boys, among them Bowe, Tyson, Holmes, Foreman and Lewis.

Last week saw the 25th anniversary of Holyfield knocking out James ‘Buster’ Douglas and winning the world heavyweight title for the first time.

“He was also involved in what surely are two of the most dramatic episodes in fight history.

In November 1996, Holyfield had defeated Tyson at the MGM Grand Garden Arena in Las Vegas by an 11th-round TKO. Their highly anticipated rematch was in June 1997 at the same venue. In the third round of that bout, Tyson shocked fans around the world when he gnawed off a piece of Holyfield’s right ear. 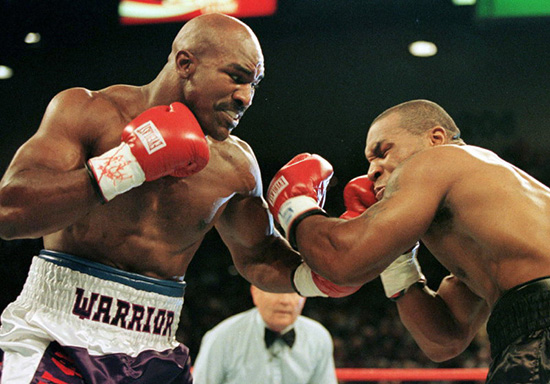 When he then tried to take a bit out of the other lobe he was disqualified by referee Mills Lane,

Tyson rampaged around the ring screaming that he was retaliating for head butts and blaming Holyfield for making it a gutter fight. He had to be restrained from clambering into the seats to confront jeering fans.

It was 25 minutes before enough calm prevailed for ring announcer Jimmy Lennon jnr to declare the official result.

Holyfield was taken to hospital. He was hastily followed by a security man who had retrieved that piece of ear from the floor of the ring and arrived in time for it to be sewn back on.

Tyson was subsequently banned fpr a year and fined $3 million by the Nevada Commission.

This weekend saw another deeply controversial anniversary involving Holyfield, for it was on the night of 6 November 1993 that one James Miller, who became known as Fan Man, power-glided into the arena at Caesars Palace, crashed into the ring and brought Holyfield’s return bout with Riddick Bowe to a halt.

Miller had descended during the second minute of the seventh round of the fight, after circling Caesars Palace for ten minutes. The lines of his paraglider became tangled in the overhead lights, after which he landed on the top rope of the ring.

Fans and security staff immediately and began attacking him, knocking him unconscious. The fight was delayed 21 minutes.

Ironically “Fan Man” claimed it was a protest against violence. He was later to repeat similar outrageous stunts, including landing, stark naked, on the roof of Buckingham Palace, for which he served a jail term. He committed suicide in 2003 – by hanging himself.

It is hard to say which was the more bizarre – the fight of Holyfield’s ear or the flight of the Fan Man.

In the years that have followed the ear-biting incident, Holyfield and Tyson have been reconciled and even appeared in a television commercial together. In a humorous Foot Locker ad, Tyson says, “I’m sorry, Evander,” handing him a box that is supposed to have the piece of Holyfield’s ear in it, saying he kept it in formaldehyde.

And this week Holyfield was at the premiere for a new film aptly named Chasing Tyson about the boxing rivalry between the pair, which will be will be aired by ESPN on Tuesday.

‘I found out boxing is the sport where you make the last decision. And this is the reason I can forgive Mike Tyson, because as a kid I bit my brother all the time,’ Holyfield said at the premiere.

Tyson himself had been Holyfield’s presenter for his induction into the Nevada Boxing Hall of Fame, delivering a laudatory speech about his former adversary, calling it “a privilege and high honour.”

No doubt they all chorused: ‘Ear, ear!”