ENSLEY BINGHAM: “A JIMMY KELLY WIN WOULD BE AN UPSET IN MOST EYES……BUT DEFINITELY NOT MINE!”

On Saturday at the Manchester Arena, well regarded local fight face Ensley Bingham hopes to finally get his hands on the WBO Super-Welter title that eluded him as a fighter 19 years ago. 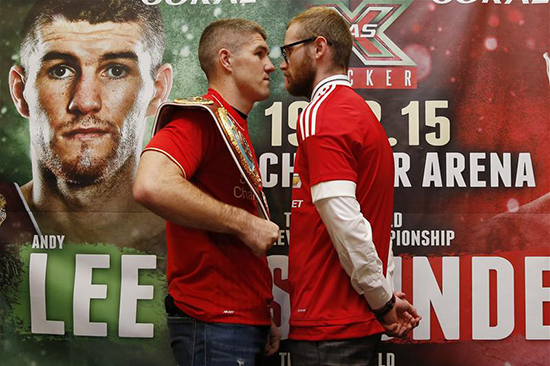 In November 1996 when the venue was known as The NYNEX, lethal left hooker ‘Bingo’ was led a wild goose chase over 12 rounds by potential Hall of Famer Ronald ‘Winky’ Wright and conceded a wide unanimous decision.

And today he tutors Jimmy ‘Kilrain’ Kelly who challenges Liverpool’s Liam Smith for the elusive belt in the same ring next weekend.

‘There were two other world title fights that night, Naz (Hamed) against Argentina’s Remigio Molina and the rematch between Steve Collins and Nigel Benn so the Nynex was packed and the atmosphere was incredible. As the curtains opened, the place erupted with shouts of ‘Bingo, Bingo’ and I thought ‘My place!’  recalls the bespectacled former British light-middle king.

‘It was ‘Winky’s’ first defence and he showed why he would become such a fantastic champion. He was a slick southpaw with a fabulous defence and the ability to adapt.  But he was also tough as nails. He gave me a real boxing lesson and I often use him as a blue print for the kids that I coach today.

‘Everybody knew I was a huge left hooker and, had ‘Winky’ planted his feet and had a fight with me, I know I could’ve done a lot of damage but the Birmingham brothers (coaches Dan and Mike) had done their homework. ‘Winky’s’ continual movement kept me off balance and I couldn’t get ‘set’ to land a big one.

‘I actually landed the hook clean once, towards the end of the fifth, but then the bell sounded. I kept hope right through to the last minute of the last round because I knew one clean shot could change the fight my way. I gave everything but, to be fair, ‘Winky’ did a job on me. Great fighter.’

Now 54, ‘Bingo’ is optimistic that he will experience redemption of sorts when the ward he has known since the age of four locks horns with Scouser Smith next week.

‘My first memories of Jimmy were at the Champs Camp gym when I was British champion. He told me then he wanted a Lonsdale Belt like mine,’ recalls Ensley who scored 16 knockout wins during a decorated 20-8 career between 1986-99.

‘Later, though I didn’t coach Jimmy at the time, I gave him advice to withdraw from the ABAs because he had a compound fracture to his hand. Thankfully, he listened – albeit reluctantly – and I helped get the hand back up to strength. I started to get involved more actively when he turned pro, shortly after.

‘He’s always been a trainer’s dream. He’s a very sensible young man who knows how to conduct himself correctly and doesn’t waste breathe rubbishing opponents. He lives a good, clean life; early to bed, early to rise and he eats healthily. He learns very quickly because he always listens.’

Since debuting together in March 2012, Bingham has navigated Kelly to 16 straight wins (seven early) plus the WBC Youth and WBO Inter-Continental titles and strongly refutes the notion that his man isn’t yet ready to perform at the highest stage.

He says: ‘Last fight, against an exceptionally tough Argie (Martin Fidel Rios)who’s won since up at super-middle , Jimmy was due on at 8.30 but the fight got shifted to after the main events when the arena was empty.

‘In the changing room, we had to constantly bring Jimmy’s adrenalin up, then wind him back down. But he did a fantastic job to maintain focus and concentration and he won by a landslide.’

Despite home court, the bookies enlist Kelly as a 9-2 outsider and champion Smith – defending just 70 days after collecting the belt with a chilling seventh round count out over New Jersey’s John Thompson – has dismissed the Manc as his ‘Christmas Wages.’ Music to ‘Bingo’s’ ears!

‘Look, Liam Smith’s a great champion with a sharp right hand, good body shots and he’s excellent at cutting the ring down. We’re under no illusions,’ says Bingham who will be assisted in the corner by Maurice ‘Hard’ Core, the former British light-heavyweight champion.

‘But I worked (Smith’s coach) Joe Gallagher’s corner for many of his amateur fights so understand how his mind operates. And while we’ve been able to study tapes of all of Liam’s fights, there’s very little footage available of Jimmy. That’s hugely to our advantage. Trust me, he’s just as capable. It’s just no one’s seen it yet. Tune in next weekend. A Jimmy Kelly victory would be an upset in most eyes…not mine!

‘He’s got the better skills; his balance, movement, angles and punch picking are exceptional. He also brings unbelievable core strength from all the wrestling he’s done. He’s deceptively tough and durable for a tall lad and if the Smith camp think Jimmy doesn’t hit hard that’ll play massively to our advantage. Jimmy’s very dangerous with either hand, and to head or body.

‘Obviously we’re keeping our tactics close to our chest. Boxing match or brawl, we’re fully prepared for whatever.

‘I expect a very, very good fight that will go all the way but we’re extremely confident. We don’t talk losing.’

The Channel Of Champions, BoxNation, will televise Daniel Jacobs v Peter Quillin live and exclusive on Sky 437/HD 490, Virgin 546 and Talk Talk 415.  Subscribe at www.boxnation.com  Or watch online at Livesport.tv and via iPhone, iPad or Android.