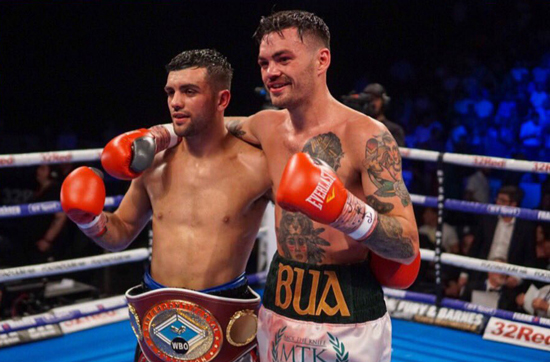 THERE WERE A few fights that thrilled us at the SSE Arena in Belfast on Saturday while, at the same time, offering a perfect illustration of the value of young fighters being prepared to takea risk.

We all know that having an ‘0’ in the debit column of career records seems to mean an awful lot to fighters these days but, the reality is, it doesn’t mean a jot if you aren’t willing to step up when the time is right and put it in jeopardy.

Learning fights and the gathering of vital experience is essential, don’t get me wrong, but there comes a time when every young boxer has to show us all what he – or she – has got in a truly competitive contest.

As Del Boy used to say, ‘he who dares, wins’… And he was right because everyone is a winner when top class fights are delivered to the paying public and TV viewers.

Take Jack Catterall’s fight against the also unbeaten Tyrone McKenna on Saturday. Jack fought a good fight and proved againhe is such a quality operator. He wasable to do so because he was up against one tough cookie in the fearless McKenna and I always feel you get the best out of Jack when he knows he is in for a fight.

Jack won on the cards – by a wider margin in my book than given by two of the judges – but McKenna has lost absolutely nothing in defeat. If anything his stock has risen considerably and he will be firmly in the frame for further big fights – and deservedly so.

The already highly-ranked Jack justified his lofty status and he is in for a big second half of the year. A fight against Ohara Davies makes perfect sense for everyone and negotiations are underway.

What a cracker that one will be.

Continuing the theme of unbeaten records being put on the line, much the same as above could be said of the fight between Johnny Coyle (18-0-1) and Lewis Benson (10-0).

There was no title at stake, just two boxers who wantedto progress their careers with a proper fight. Coyle won by a point when it could have gone either way, but the prospects of Benson will in no way be affected by the reverse on his record.

He has proved he can mix it at a higher level and he is probably closer to title contention now than he was before.

I’ve always banged on about defeats not representing a major setback for young fighters and I usually hold up the example of Amir Khan, who was pole axed in less than a minute by Breidis Prescott back in 2008.

Two fights later we had him fighting for – and winning – his first world title. So it didn’t do him too much harm.

There were two others on Saturday’s Belfast card for whom taking an early risk paid dividends four years later. The Dubliners Jono Carroll and Declan Geraghty fought each other after two and seven fights respectively first time around over four rounds in afight that stuck in the memory of many.

It developed a rivalry that saw to it that they got to do it all again for a title at the weekend and, once again, it didn’t disappoint.

That ‘0’ might be cherished but the clue is in the digit – it really means nothing.