Fast improving Belfast featherweight Ciaran McVarnock gets a rare but welcome opportunity to flaunt his talent on home turf tomorrow evening when he features in a four rounder on the monster ‘Second Coming’ bill at Dublin’s National Stadium. 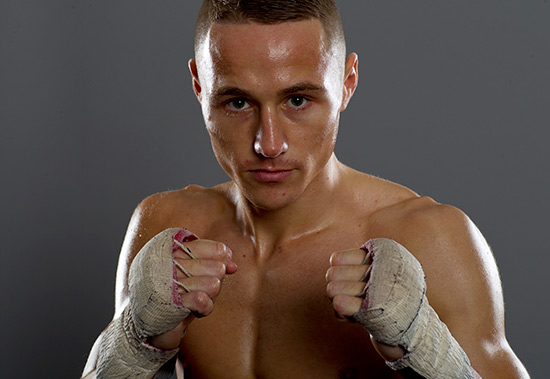 The one time protégé of ex Commonwealth cruiserweight king Darren Corbett at the Sacred Heart ABC in Belfast will be hoping to extend his unbeaten run to six.

‘I usually box far away from home so this’ll be fantastic,’ says the humble 23 year old Ulsterman, known as ‘Bunty’, who is now schooled by ‘Arnie’ Farnell in Manchester.

‘There’s about 100 coming down from Belfast but I’m anticipating great support from all the Irish in the arena.’

The solitary blemish on Ciaran’s pro slate thus far occurred in his last gig when he tied over four rounds with Zaragoza’s Jose Acero in Marbella.

Since joining the paid ranks in February 2013, McVarnock has served an invaluable if painful apprenticeship as a chief spar hand to ex IBF bantam boss Paul Butler at Farnell’s Failsworth gym.

‘During our first spar, Paul dropped me for the first time in my life with a body shot,’ concedes Ciaran, who great uncle Eddie ‘Bunty’ Doran beat Scotland’s world flyweight champion Jackie Paterson back in the 1940s.

‘Paul’s hurt me since but has never put me down again. We usually don’t stand and trade. I love picking things up from sparring him or watching him; he’s so skilful with his head movement, shoulder rolls and footwork. He’s an absolute gentleman to boot.’

But now it’s time to start advancing his own career.

‘The busier I am, the quicker I’ll improve,’ he says.

‘I’m a featherweight but thus far just two of my opponents have been around 9st, 9st 2(lbs). The rest were much heavier. Once I start fighting boys my size I’ll really start to shine.

‘Next winter (2016), I’d like to be fighting for some form of title but I’m in no rush, one fight at a time. I’m still a novice, still learning every day. I’m certainly not at a stage to be calling fighters out.’

He knows a quality performance tomorrow is imperative if he’s to persuade the matchmakers to keep him active.

‘I hear the opponent is a bit of a survivor, hard to tag with a clean shot but hopefully, I’ll be able to show my boxing and skill….make ‘Arnie’ proud!’ 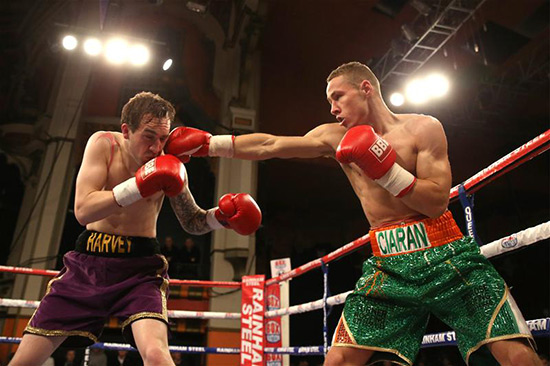 ‘Putting it mildly, he weren’t the most talented when he first landed but, through hard work and determination, he’s just got better and better. He’s a top, top lad, quite shy but he’d do anything for anyone and he really wants to learn. He’s come on leaps and bounds sparring Butler.

‘When Ciaran first came to me he was an out and out scrapper. Now, if anything, he’s gone too far the other way. He’s using his brain too much!

‘He’s got more heart and determination than any fighter I’ve ever met. He’s so dedicated, he deserves everything he gets. If I told him to go for a 30 mile run after a brutal training session, trust me, he’d do it without a hint of complaint. He’ll go through walls and, because of that, he’ll get a lot out of his career.

‘Forget the blip in Spain last time. Even though it was short notice and he needed to lose a lot of weight, he comfortably beat a Spaniard in Spain but they called it a draw. All part of the learning curve.

‘Opportunities have been limited but now a businessman called John Blower has started to look after Ciaran  and we expect him to really kick on. He just needs lots of fights now and we’ll get him there. Another two years and he’ll be knocking on the top ten.

‘I’d be very surprised and disappointed if he didn’t win the British title. He has the ability.’

Watch Ciaran’s fight on the ‘Second Coming’ bill from Dublin’s National Stadium this Saturday, live and exclusive on BoxNation, the Channel of Champions, from 5pm (Sky 437/490HD/Virgin 546/Talk Talk 415 or Livesport.TV). Join at www.boxnation.com