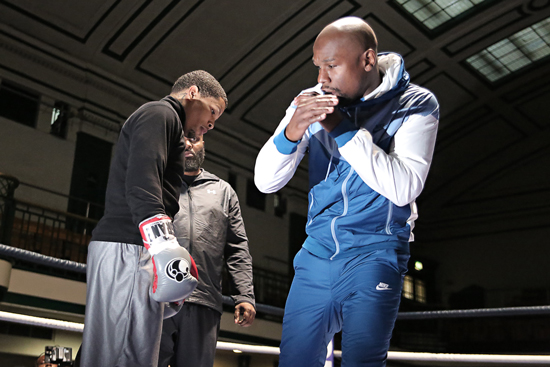 The fight legend made a shock appearance at York Hall, Bethnal Green to check out his fighter Gervonta Davis.

‘The Tank’ who defends his IBF super-featherweight crown against Liam Walsh at London’s Copper Box Arena on Saturday night performed a public workout.

Mayweather, who retired with a stunning 49-0, was chased by fans when he arrived at the venue in London’s East End before relaxing with the boxer he promotes.

Moments earlier underdog Walsh had performed and is ready to cause an upset after a 16 week training camp.

Walsh said: “The intensity increased slowly. If I had a ten week camp it would have been intense from the off.

“I say I have been training hard for four months, but I train all year round. I was even running the day after Klimov and I’m ready.

“He is getting a lot of media because Mayweather says he is the future of boxing.

“Some people just think it’s true and just at follow along instead of having their own thoughts and believe everything they’re told.

“For me he looks very good and there is no doubt he’s a world class fighter, but there are still a lot of questions to be asked.”