FIGHT OR FARCE? EITHER WAY McGREGOR AND THE MONEY MAN COULD BE FUN 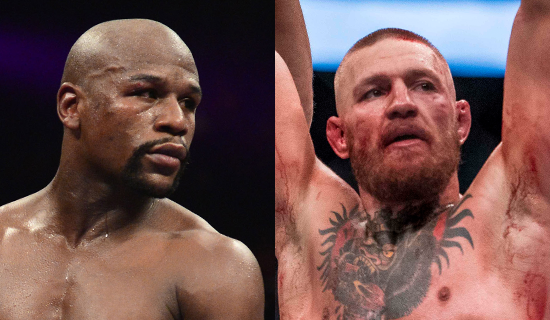 Over the coming weeks, two captivating – in different ways – clashes of fistic combat will be striving to capture attention and, ultimately, part you with a piece of your hard earned.

The first one, taking place in Las Vegas on August 26, is a huge event – some might say an exhibition – where none of us can really be sure what we are going to get. The second, at the same T-Mobile Arena on September 16, is the real McCoy, a proper fight between two proven boxers, doing what they both do for a living with the pair at the top of their game.

I am not here to knock the matchup between Floyd Mayweather and Conor McGregor, far from it, but comparisons with the pairing of Saul ‘Canelo’ Alvarez and Gennady Golovkin are completely invalid.

Many people in boxing are turning their noses up at it right now but, let’s get it right here, Mayweather-McGregor would not be happening unless there was a huge public demand and the prospect of it has been floating around for some time now.

Canelo-Golovkin is also by public demand – the demand that the best fight the best at the optimum time. Boxing doesn’t always get it right in this respect, but these two are now in their pomp and we have got some fight on our hands.

The fact that it is between two consummate professionals means the build up will almost certainly be devoid of the histrionics likely to be employed by Mayweather and McGregor to ramp up pay-per-view sales.

I think more people are actually looking forward to the build-up than the fight itself. And they might be right in that because we just don’t know how this one will play out.

Floyd Mayweather was the standout fighter of his generation and did everything he could do. He is now fighting the standout UFC fighter under the rules of boxing.

I don’t know whether McGregor can box because I have never seen him box, so it is difficult to pass judgement on him. He could turn out to be the greatest boxer ever! Who knows?

Will McGregor be able to outbox Mayweather? I doubt that. They say he has got a big punch and everybody has got a puncher’s chance, but a lot of people have held that card against Mayweather and he has nullified them all.

Will it prove to be the real deal in terms of being a contest? I’ve got no idea. It will either be a damp squib or end up being entertaining. I shouldn’t think it will be anything in-between.

There can be no doubting that the fight will shine a light on and attract many new eyes to the sport of boxing, but people really do need to understand what they are buying into. If it turns out to be a stinker, boxing doesn’t deserve to suffer a backlash if people are aware what they are signing up for.

We are talking about a 49-0 boxing superstar – albeit a retired one – taking on a zero-fight novice at the sport. The fact that McGregor is the top dog in the world of UFC gives the fight its novelty value.

Saying that, I can’t see McGregor, coming from his background, swallowing it – and I know Mayweather certainly won’t. They are probably the finest exponents in their respective fields, but they are two very different disciplines.

As a boxing man, I’m certainly not going to get on my high horse about it all because, for once, it might just be fun being taken for a ride before we get down to real business on September 16.