What on earth was Manny Pacquiao thinking when he embarked on his astonishing homophobic rant last week?

As a putative political leader in his native Philippines he should have been aware in this age of acute political correctness that, just as Tyson Fury did, he was whipping up not so much a storm but a veritable tsunami. 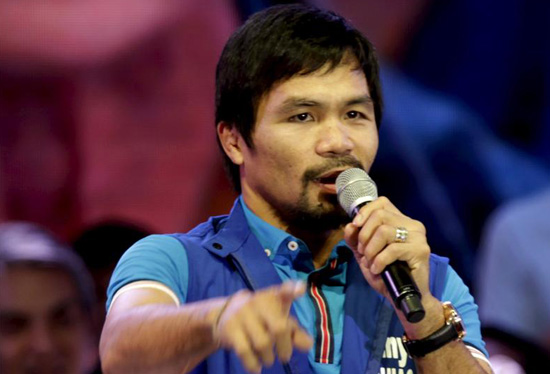 His comments about gay marriage – which is outlawed in his homeland –were far more serious the passing reference on the subject of homosexuality and the derogatory remarks about women made by Fury which resulted in a stern reprimand to the new world heavyweight champion from the British Boxing Board of Control.

Will any of the world’s governing bodies now take action against the Pacman who is due to fight Timothy Bradley in what he says is his fistic swansong in Las Vegas on April 9?

I doubt it – nor I suspect will ticket or PPV sales be affected one iota.

Pacquiao has issued a perfunctory apology, far less fulsome than Fury’s, after stating: “Do you see animals mating with the same sex? Animals are better because they can distinguish male from female. If men mate with men and women mate with women they are worse than animals.”

Pacquiao, already a congressman, is running as a candidate for the Philippines senate in May, which some believe eventually could lead to a future bid the presidency.

But has he burned his proverbial boats?

Sportswear giants Nike have been the first to jump on the anti-Pacquiao bandwagon, withdrawing their sponsorship from the 37-year-old former multi-weight world champion.

However I find this somewhat disingenuous considering their continued backing of doping-infested athletics and in particular the twice banned US druggie sprinter Justin Gatlin.

Of course Pacquiao and Fury are not the first fighters to cause public outrage. Back in the sixties Muhammad Ali shocked America by declaring that “white birds fly with white birds and black birds fly with black birds.” It was deemed at the time to be racist but since then his views have softened.

As it happens boxing is probably now the least racist of all sports, and it certainly does not have a problem with homophobia.

But what perturbs me is that, like Fury’s, Pacquiao’s comments were made in a Biblical context.

His original remark was made in a television interview and he initially appeared unrepentant writing on Instagram that he was “just telling the truth of what the Bible says”.

Then in his ‘apology’ he said:” “I still stand on my belief that I’m against same sex marriage because of what the Bible says, but I’m not condemning LGBT. I love you all with the love of the Lord. God Bless you all and I’m praying for you.”

Personally I have no religious affiliation but I am not sure what he says about the teaching of the Scriptures is actually accurate.

Punching preachers have been with us since the days of the Rev Henry Armstrong, aka ‘Hammerin’ Hank’, the only man to hold three world titles at the same time before being ordained as a Baptist minister

The fight game seems to be littered with Born-again boxers whose constant proselytising seems more suited to the pulpit than the ring. They certainly appear to fear God more than they do their opponents.

Each to his own, but I just wish there was a little less wearing of religion on the sleeves of their dressing gowns.

British cinemas have rightly decided that theirs was not the place for religious advertising and I respectfully suggest the same should apply to the boxing ring – indeed any sporting arena.

Not that this is really a new phenomenon. Sport and religion have gone hand in glove for years.

Watch the Premier League. A huge number of players genuflect as they run on to the pitch.

There are copious links between sport and spirituality but nowhere is this stronger than in boxing. Maybe it is because of the very nature of the sport with its inherent dangers that so many of its protagonists turn to their God.

However I wish they would all follow example of Amir Khan, a practising Muslim, who once told me: ”I don’t take religion in the ring with me. Religion should be private.”

Quite. I doubt I am alone in becoming weary of those few proselytising pugilists. Surely its time to stop punching Bibles and concentrate on punching noses, as the vast majority of boxers prefer to do.