FIGHTING ON TELLY IS WHAT YOU DREAM OF 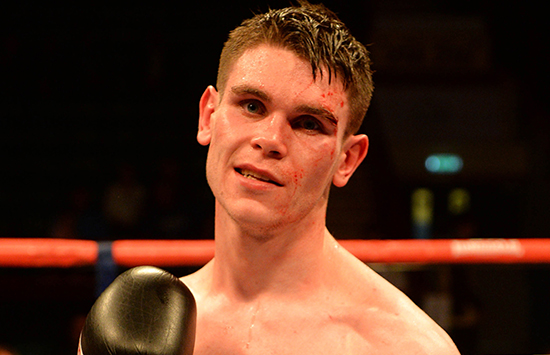 Fighting under the television lights for the first time was an experience Tommy Ward will never forget – especially as he left Leeds in May as British champion. Ahead of getting to fight on his home patch of the North East in his first defence against Sean Davis, in his exclusive Fighter Diary, Tommy reflects on a night that changed his life…

LIFE HAS CHANGED for the better since becoming British bantamweight champion in May and I am loving the bit of publicity I’ve been getting.

I’ve been asked to attend a few local amateur shows and have been invited to a good few other events, so it’s been a nice feeling for me to get the recognition.

My belt has been getting about a bit and, when I get asked to go places, I feel obliged to go. I’ve never had it before and now it has started happening I feel very, very privileged.

I guess the difference this time was being given the opportunity to showcase what I can do in front of the BT Sport and BoxNation cameras on such a big show in Leeds.

A lot of people get to see you and know who you are, there is more publicity there and your name gets about a bit more. It makes such a difference and fighting on telly is what you dream of as a kid and as an amateur.

You sit and watch big fights and think ‘I want to be a part of that’ and when you get to do it, it is fantastic.

The whole experience before my fight for the title against Jazza Dickens in Leeds was a bit weird for me, with the attention and filming with BT Sport for their preview clips.

It was new for me, it was overwhelming and I enjoyed it. Hopefully there will be a lot more of it to come. I am looking forward to what the future holds with more big things.

With the fight itself, the way it ended was a bit of a downer, but I felt like I was winning the fight and I was following a gameplan.

Everything was going to plan and there were no worries on our side as we were outboxing him. It was my first time on telly and on a big stage so I was really enjoying the fight.

To have the fight end on a nasty cut was the downside of it, but it comes with boxing and goes with the territory.

I was confident I was winning the fight when it went to the cards, but I was more devastated over how the ending came about. It wasn’t a little cut and it was deep.

A few things do go through your mind when you are waiting for the decision, even though I felt I was in control, but you never know.

I got the victory and beating Jazza was a big thing for me, even though it was bitter-sweet.

There was talk of a rematch but that is not in my hands. I am not a promoter or manager, I am a fighter. I train and I fight the people who are put in front of me. My job is to beat them.

If it comes around again then fine because I am happy to fight anybody in the world, but my eyes are on a bigger prize and I will be trying to win every fight I can to move on to bigger and better things, where I believe I belong.

I will just take one fight at a time and that is all I can do.

My first defence is next for me against Sean Davis, but I can’t tell you much about him because I don’t go in for watching my opponents.

I am in great shape and I am just looking forward to another big night being on telly. I will go out there and enjoy it because it is a short career as a boxer.

It is a fantastic show in Newcastle and, if I wasn’t boxing on it, I would be going along to watch. There are some cracking fights on the card and it is a privilege to be a part of it.

Hopefully one day I will be topping a bill up here myself.

The North East has been quiet for some time, so the fact they are bring big-time boxing back here is fantastic. Everyone I talk to is loving it because the great nights are coming back.

I need to keep my belt and help in keep bringing big boxing nights to the region – that is what I want to do.

It is a great venue, a great area and I am looking forward to it.