Finally,Dr Wu walks the pugilistic plank but goes with dignity

Boxing is a sport where there is often more in-fighting outside the ring than between then ropes. Especially that  branch of fisticuffs which used to be known as amateur boxing.

Never has this been more evident than the internal combustion that has led to the resignation  of Dr Ching-kuo Wu as the  embattled president of Aiba (the international boxing federation) four months after the group’s executive committee overwhelmingly approved a no-confidence motion against him for alleged mismanaging the organisation’s finances.

In a statement, C K Wu, who led the Aiba for 11 years, said he would “step down in the best interests of both Aiba and boxing” and would “ensure a smooth handover to the new leadership.”

In October, Wu was also suspended by the Aiba’s disciplinary commission for entering into commercial agreements without the consent of the organization’s board.

Both the organisation and Wu said “at this stage there is no indication of any unethical behavior by either party.”

Some of the executive committee members were disturbed that Wu, an IOC  member  supported a reduction in the number of men’s weight classes in the Olympics, and that the decision was made by a group that did not include them.

Wu, who challenged unsuccessfully for the IOC presidency at the last election, has subsequently also resigned from the IOC Executives Committee.

He went to court to halt the efforts to oust him, but he appears ultimately to have stepped down rather than continue to fight the charges against him which somewhat surprises me.

We are old sparring partners on the pro-am issue and I have mixed feelings about his departure for in so many ways he was a force for good for the sport.

At least he has been allowed to go with his dignity and much of his reputation intact, there is little doubt that he was made to walk to pugilistic plank.

He clearly over-stretched himself, as well as Aiba’s finances it seems.

Dr Wu’s driving ambition to make Aiba the Fifa of the fight game was never going to succeed and surely was part of his undoing.

Unification of government of this fractured sport may be an ideal, but logically it was never one that is achievable in his lifetime or mine. Nor should it be. The two aspects of glove are worlds apart.

I have disagreed vehemently with Dr Wu on occasions  over his frankly unattainable desire to become the pooh-bah of boxing, bringing even the professional side of the sport into his domain..

On the other hand reform of Olympic eligibilty criteria has been top of the English-educated 70-year-old construction magnate Dr Wu’s agenda since he was elected president in 2006. It has been impressive.

Under his influence the word ‘amateur’ has been removed from its official title as well as all international boxing tournaments including the Olympics, where headguards have been abolished (apart from in women’s boxing) and a pro-style ten points scoring system introduced.

Dr Wu, who has admirably cleaned up a sport where corruption and bent judging was once endemic, also instigated “professional” competitions such as Aiba Pro Boxing and the increasingly successful, team-based World Series of Boxing,which has been televised by BoxNation.

Under new rules pro boxers who have had fewer than 15 fights and are committed to APB are now eligible to compete in the Olympics.

However I have always believed that allowing top pros, including current and former world champions to take part in what is already a complicated qualification process is not only unrealistic but unfair.

It may be all very well in theory but it simply wouldn’t work in practice.

Another plus for Dr Wu is that under his aegis there hasn’t been a doping scandal or a serious injury in Olympic boxing, which was once under threat but is now well and truly cemented in the Games programme.

Dr Wu should be content that under his governance Aiba, and the boxing it controls, is now in a better state than it has ever been, but it must now leave the real pros to fight their own battles.

I HOPE, LIKE ME you will be staying up late this weekend to witness a piece of real boxing history on BoxNation featuring one of the game’s all-time favourite fighters, Miguel Cotto, in what is set to be his valedictory appearance. 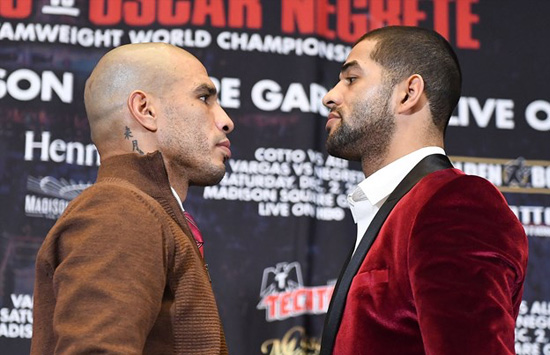 As I have said here before, I love Cotto. A true artist on ring canvas, for me he is one of those pros who are the very backbone of boxing, a fighters’ fighter who never lets anyone down, least of all himself.

A box-fighting punch trader of the highest order and the man who Floyd Mayweather jnr has described as “the toughest guy I ever fought.”

At 37 the poker-faced Puerto Rican seems to have been around forever (actually it is almost 17 years) and his 46-fight record through a clutch of multi-titled weight divisions is studded with star names he has either beaten or have given one hell of a fight, from Mosley to Alvarez via Pacquiao and Mayweather.

Cotto against Sadam Ali, from the sport’s Mecca, Madison Square Garden in New York, is a 12-round fight for his newly-acquired WBO world super-welterweight title. It is likely to be a fast and fiery encounter, as Ali.a 29-year-old Yemeni American, winner of 25 of his 25 contests, is no pushover opponent for the great man’s 47th and final fight.

As BoxNation’s Steve Lillis says, this is a great opportunity to appreciate Cotto’s “tenacity, elegant footwork and intelligent counter-punching…he has done nothing but good for boxing. He owes us nothing and has  always been a turn-to fighter to keep the game relevant and fans interested.”

There certainly could not be a more fitting venue for his farewell. Miguel Angel Cotto has paid his dues to boxing and now we should pay him our respect.