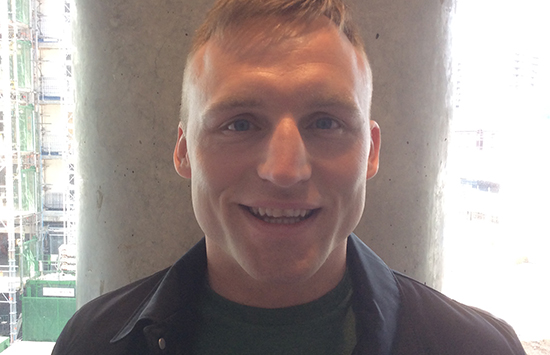 James Metcalf bids to propel himself into the top echelons of the super welterweight mix on Saturday when he fights for a first title on the big ‘He’s Back!’ show at the Manchester Arena. The quiet man from Liverpool will be looking to make a noise with his exploits, but don’t expect him to do too much talking afterwards, as he explains in his first Fighter Diary…

WHEN I FIRSTgot news of being added to the big show at the Manchester Arena on Saturday, my first thoughts were the hope of a title being at stake on the night.

My wish came true and I am fighting for the vacant WBC International super welterweight title against Aitor Nieto.

There was strong talk about me coming up against Liam Williams and that is the sort of fight I am more than happy to be a part of and I have wanted it for a while, but it wasn’t to be this time.

I am not one to go shouting the odds though because I am a bit old school really and have never been big on talking when the cameras get put in front of me.

I go to bits and maybe I just don’t do it enough! The more I do it the easier it will get I suppose, but I think I will just stick to the way I am.

You do get told what is being said about you on social media and the amount of people who go ‘just say this’ or ‘just say that’ you wouldn’t believe. But I just can’t do it. It is just not me and I am not going to try and be someone I am not.

I have had Asinia Byfield calling me names on Twitter for not fighting him in an eliminator and there is definitely the temptation to respond. I would fight him outside now and it wouldn’t bother me, but why would I avoid him and then accept a fight against someone like Liam Williams? It proves that I am not a coward.

I am a much better fighter than Byfield and he has just got a big mouth. He tries to talk his way into fights but he hasn’t got the backing at the minute and people probably don’t want to fight him because there is no money involved.

I am 29 now and I feel that I need to get going and have felt like this for a while. I haven’t really had the opportunities before now and maybe it is because I am not on Instagram or other social media.

Perhaps I need to start using it a little bit more, I don’t know.

Now I am with Frank Warren I am starting to get the opportunities.

Before then I did end up having to go back to work, working on the railways and stuff like that, just whatever I could to stay in the gym and train as hard as I could.

After joining up with Frank I have been kept busy and in my last fight I went in against Damon Jones in a title eliminator. He won the ABA title in the same year as me at a different weight and he is awkward. I remember watching him and thinking I wouldn’t like to fight him, but then it came up and I couldn’t not take a chance like that.

I ended up stopping him and put myself in a good place in what is one of the busiest weight divisions. I was looking at it on Boxrec the other day and I think it has got the most people listed, with a lot of good fighters in there as well.

If you can win fights against those you would be in the mix at world level.

I get asked sometimes why I don’t make a bigger deal of my dad – Shea Neary – being so successful in the sport when it comes to my career and profile. Even though my dad is a massive part of my boxing – he trains me and I speak to him daily about boxing – I wanted to do it for myself.

You see the likes of Eubank and they feed off what their dads have done. I never want to be given anything and I want to do it off my own back.

I am doing it the hard way, aren’t I…? But I will get there somehow.