WBO World Lightweight champion Terry Flanagan and challenger Derry Mathews both hit the weight at today’s weigh-in for their eagerly-anticipated showdown tomorrow night at the Liverpool Echo Arena, live and exclusive on BoxNation. 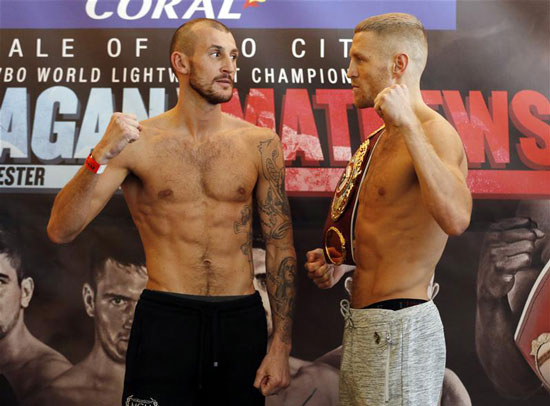 Undefeated Flanagan, making the second defence of his title, looked in sensational shape weighing in spot on the 9st 9lbs limit. The Mancunian lightweight king will be looking to show the Echo Arena crowd why he is rated as one of the very best boxers in the world.

“All the talking is over and now it’s time to get in the ring and get it on. I’ve put everything into my training and I’m ready to show everyone that I’m the best lightweight in the world. I’m expecting a tough fight from Derry, we’re both in the best shape of our lives but I’ll have too much for him to handle,” said Flanagan.

Merseyside hero Mathews came in at 9st 8lbs and looked in tremendous condition ahead of the biggest night of his career. All-action ‘Dirty’ Derry is gearing up to make history in his 50th professional fight in front of his home crowd.

“I’m feeling great, everything has gone perfectly so far. I’m ready for everything that Terry is going to bring. I’m bringing my A game and I hope that he brings his. I hope that the crowd get their money’s worth in an exciting fight and fingers crossed it will be a great night for Liverpool,” said Mathews.

He added: “I’m excited and getting nervous which is only human but I’m loving every minute of it. I can’t wait to get in there now.”