FLANAGAN FIGHTING BACK FROM INJURY WITH HELP FROM MAN CITY

WBO World Lightweight Champion Terry Flanagan is back in full training thanks to the help of Premier League giants Manchester City.

The 26-year-old has been working closely with City’s lead physiotherapist Paul Kelly at the state-of-the-art Etihad Campus after suffering from severe tendonitis in his foot that left him unable to train ahead of his huge world title defence against Liverpool rival Derry Mathews. 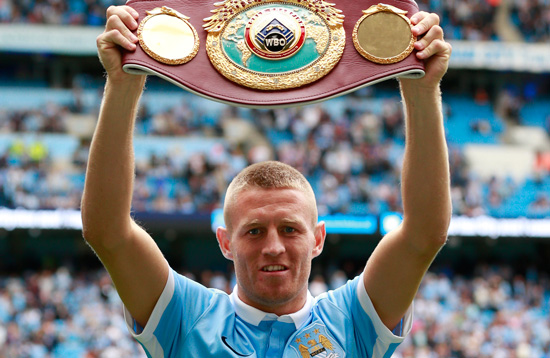 The impressive £200m training complex was opened in December 2014 and boasts a 7,000-capacity stadium, education facilities and medical and sports science facilities. Kelly is used to working his magic on multi-million pound stars such as Sergio Aguero and Vincent Company but has offered his services to ‘Turbo’ in a bid to get him back to fighting fitness.

“I’ve been seeing Paul one or twice a week since the injury occurred and he’s been a massive help. The injury seems to have cleared up really well and I’m back in the gym doing what I need to do. Their training complex is out of this world and it’s been great being able to use all of their facilities; there’s massive altitude chambers and treadmills that allow you to run at 50% of your body weight,” said Flanagan.

He added: “Paul is amazing at what he does and the training complex is on another level so I’ve given myself the best possible chance of a full recovery. He’s put me in contact with other specialists who have taken a look at my foot so we’re leaving no stone unturned. I’ve been strengthening the injured tendon by using a band that Paul gave me; the exercises I’ve been doing with him really seem to be working.”

Flanagan, who is undefeated in all 29 of his professional fights, is coming off the back of a devastating performance in October when he smashed his mandatory challenger Diego Magdelano inside two rounds at the Manchester Arena. After a successful rehabilitation the Mancunian remains confident he will dispose of his Souse rival in a similar fashion.

He said: “I’m pretty much ready now it’s just with the injury I wasn’t where I needed to be at that stage of the camp. Now the fight date has been pushed back I feel like I’m going to be 100% ready. I didn’t want to go into the fight with any doubts running through my head and my team didn’t want to give Derry any advantage whatsoever. This belt is mine and there’s no way Derry is getting his hands on it.”