“Turbo” Terry Flanagan is set to go Supersonic in his mega-fight against Derry Mathews on February 13 after gaining a celebrity fan in Oasis legend Noel Gallagher. 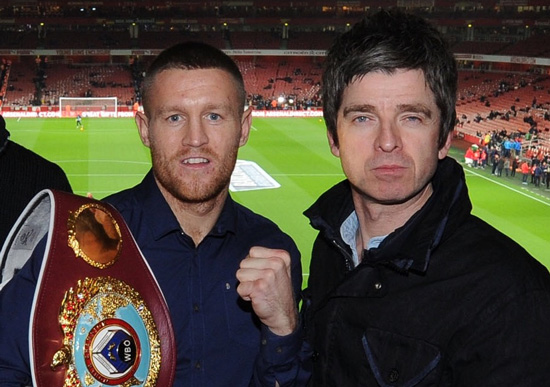 The undefeated WBO World Lightweight Champion met big boxing fan Gallagher at the recent Arsenal-Manchester City Premier League clash and was knocked out meeting his idol for the first time.

Flanagan, who makes the the second defence of his title against Liverpool rival Mathews on Saturday 13th February at the Echo Arena, was rocked even more when Gallagher suggested changing his nickname to the Oasis hit song because of his thrilling, relentless, all-action style.

“He’s a superstar and hero of mine but he’s still just a regular, down to earth, Manchester lad like me who loves music and football,” Said Flanagan.

“I love Oasis’s music and use it to train to in the gym, classics like ‘Supersonic’ really gets my blood pumping for a fight, in fact he said I should replace my Turbo nickname with Supersonic because of the way I fight.”

Gallagher was a keen supporter of British great Ricky Hatton in his heyday and believes that Flanagan can become just as big as the “Hitman”.

“Noel was a big fan of Ricky Hatton in his fighting days’ and said that I’m the new Ricky Hatton who can bring the much needed excitement in the sport just like Ricky did, which is big compliment,”

The red-hot Manchester v Liverpool clash between Flanagan and Mathews is expected to be just as explosive in the ring as when the two football teams collide on the pitch and Flanagan has suggested a classic Oasis track for Mathews after he’s defeated him.

“He said he’s looking forward to my fight against Mathews just like he looks forward to a Man City match against Liverpool, he’s really rocking for me to beat Mathews,”

“I can’t wait for my fight with Mathews next year and I’ve got the perfect Oasis track for him when I’ve beaten him, ’Stop Crying Your Heart Out’.

CLICK HERE FOR A PHOTO TO USE OF FLANAGAN AND GALLAGHER