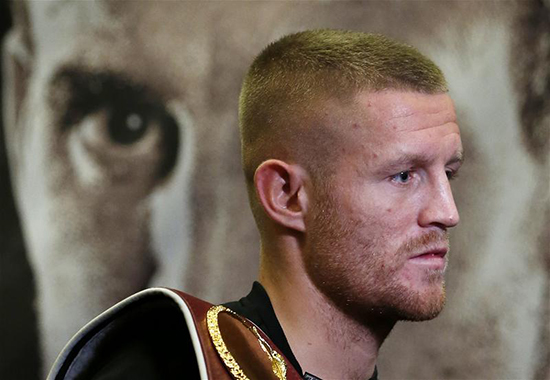 The undefeated Manchester star makes the second defence of his title against his Liverpool arch-rival on Saturday 13th February, 2016, at the Echo Arena.
Flanagan, England’s first ever world lightweight champion, blew away mandatory challenger Diego Magadaleno inside two rounds in October and wants to do the same demolition job on Mathews.
’Turbo’ is heralded as the best 135lb fighter in the world and is on a mission to make 2016 the year that he unifies world titles.
WBC king Jorge Linares has called him out for a showdown and promoter Frank Warren has also offered WBA title holder Anthony Crolla £500,000 to face the winner out of Flanagan and Mathews.
Flanagan is excited by what lies ahead and knows he must defeat ‘Dirty’ Derry to open up his unifications opportunities.
“Mathews is standing in the way of me unifying titles and he’s going to have to be smashed out of the way on February 13,” Said Flanagan.
“I’m in boxing to prove that I’m the best and I’ll fight the best, Mathews is slowing me down, I’ll beat him in Liverpool and then move on to the big unifiers in 2016,”
“He’s not getting overlooked as he says, I’m taking him deadly serious and training for him as I would for any opponent and giving them my full attention,”
“I can’t afford any slip ups against Mathews because that would be right embarrassing losing my title to him in Liverpool so I’m doing everything I can to make sure I remain champion at the end of the night,”
“Linares is calling me out and then there’s Crolla who Frank Warren has offered half a million pounds to fight the winner out of me and Mathews, which will be me and that would be a cracking derby,”
“It’s hard not to be distracted but it’s all just talk at the end of the day, the cold reality is if I lose then it’s all off the table so right now I’m just concentrating on what I’ve got to do and that’s to smash up Mathews.”
Ticket for ‘A Tale Of Two Cities’ are priced at £40, £60, £80, £100, £150* and are available from: