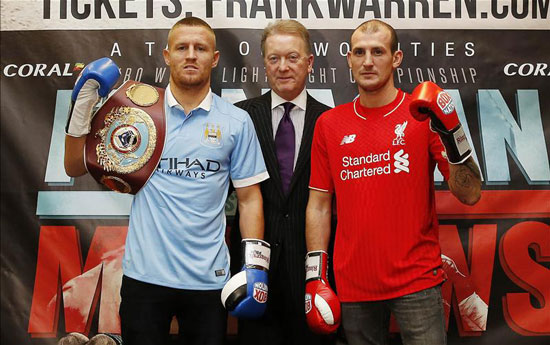 The Mancunian promises to heap more misery on Merseyside when he defends his world title at the Echo Arena on Saturday 12th March, live and exclusive on BoxNation.

It took City the full 90 minutes, extra time and then penalties to finally get their hands on the first silverware of the season but the all-action ‘Turbo’ is predicting his eagerly-anticipated North-West showdown with Mathews won’t be going the distance.

“Derry is kidding himself if he thinks he’s getting his hands on my world title. Liverpool took City all the way to penalties but Derry won’t be lasting the full twelve rounds with me that’s for sure. You’ll see on the night who the true champion is and that’s me,” said Flanagan.

Bitter rivals Flanagan and Mathews will be lacing up gloves of a different kind in 13 days’ time and the unbeaten Manc says there’s no way Mathews will be keeping out his hooks and jabs.

He said: “I’m fitter, faster and stronger than last time we met. I’ve got too much for Derry to handle and there’s no way he’ll stand to my big punches. I’m the younger and hungrier fighter and on the night I’ll be too quick for him.”

Liverpool have a chance of immediate redemption when they host City in the Premier League on Wednesday night. However, Flanagan is confident of another win for Pellegrini’s title-chasing superstars and is promising to do his bit by keeping the bragging rights in Manchester when he takes on ‘Dirty Derry’.

He said: “After we beat them in the league on Wednesday night I’ll be making it a hat-trick of wins over the Scousers in two weeks’ time. I’ll be bringing an army of Mancs with me and we’ll be leaving Liverpool with my world title and even more bragging rights.”