Terry Flanagan aims to be crowned WBO World Lightweight Champion in front of his home fans when he faces American KO king Jose Zepeda on Saturday 11th July at the Velodrome (The National Cycling Centre) in Manchester.

With this year being the 10th Anniversary of Manchester idol Ricky Hatton’s epic win over Kostya Tsyzu, Flanagan will be looking to emulate his hero and deliver a similar performance against dangerous Zepeda to win the title.

Flanagan headlines the blockbuster show ‘Turbo’  that also features British stars Billy Joe Saunders, Liam Walsh and Jack Catterall all in championship title action and the return of Paul Butler on one big night of action, live and exclusive on BoxNation.

An announcement for ticket on-sale date will be made shortly.

The Channel Of Champions, BoxNation, will televise the show live and exclusive on Sky 437/HD 490, Virgin 546 and Talk Talk 525.  Subscribe at www.boxnation.com Or watch online at Livesport.tv and via iPhone, iPad or Android. 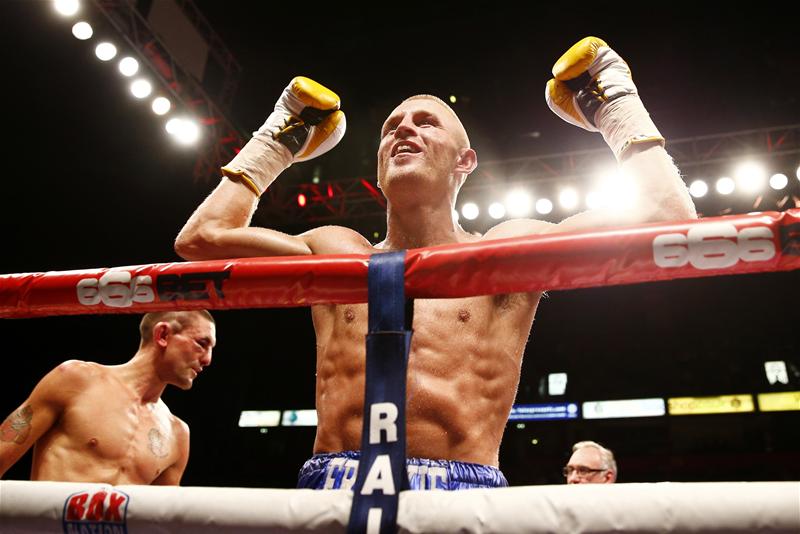 Promoter Frank Warren secured Flanagan his dream of a world title shot on home soil when he reached an agreement with Zepeda’s promoter Top Rank last week and avoided a scheduled purse bid for the vacant title.

With Flanagan’s world title fight secured, the showdown with Zepeda has to be staged within a certain time frame and with a fight of this magnitude it requires a large venue to host it.  This has meant that the Queensberry Promotions show on Saturday 20th June at the Liverpool Olympia – featuring Butler and Catterall plus top talents Tom Stalker, Adrian Gonzalez, Steven Lewis, Joe Costello, Macaulay McGowan and Andrew Cain – will now form the undercard on the Velodrome show.*

Flanagan, 25, holds a sparkling unbeaten record of 27 fights with 10 KO’s and in his last fight defeated Stephen Ormond in a thrilling fight to claim the WBO European crown when the Irishman was disqualified in the tenth round due to persistent use of the head.

If he’s going to make his dream a reality, Flanagan needs to overcome knockout specialist Zepeda from California, who’s ranked at number five in the WBO, and has stopped 20 out of his 23 victim, with a staggering 16 KO’s coming inside the first three rounds

Southpaw hitter Flanagan is thrilled to get his moment of glory in front of his home fans and says the Velodrome will be packed with his followers on the night.

“It’s a dream to fight for the world title on my own doorstep and it will be an electric atmosphere on the night at the Velodrome,” said Flanagan.

“I’d have fought Zepeda anywhere because to get a world title fight has been my dream since first putting on the gloves, but my promoter Frank Warren has really pulled out all the stops to get me my chance in my backyard as he believes in me and I’ll repay that faith by becoming world champion.

“Ricky Hatton is a big hero of mine and I was at his fight against Kostya Tszyu and that was one amazing night.  If I put in a top performance and win the title on the tenth anniversary year of that fight it will be an incredible feeling.

“Zepeda can certainly punch, he’s stopped nearly all of his opponents with the majority coming inside three rounds.  It’s not just about being able to punch at this level, though, what happens when I start dragging him into the later rounds and he’s going into uncharted territory? Can he cope with the pace I’m going to set? These are all questions he’s going to be asked of him and remember I can bang as well.

“I’m not saying it’s going to be an easy fight, it’s the biggest and hardest night of my life and I’m going to train and prepare for this like never before and do everything I can to win that belt.”

A sensational line-up on the show will also feature middleweight ace Billy Joe Saunders as chief support in a warm-up contest as he closes in on WBO World Champion Andy Lee for an Autumn showdown.

Exciting Cromer talent Liam Walsh defends his British and Commonwealth Super-Featherweight titles on the card against mandatory challenger Troy James as continues on the path to world glory.

Ellesmere Port star Paul Butler, the Former IBF World Bantamweight Champion, makes his highly-anticipated comeback as he looks to get back on track with a history making second world title at super-flyweight still in his sights.

And lastly Chorley ace Jack Catterall makes the second defence of his WBO Intercontinental Light-Welterweight title as he marks himself as one of Britain’s hottest young talents.

Promoter Frank Warren said, “I’m delighted to return to Manchester with this fantastic summer show featuring some of the best talent in British boxing,”

“I’ve delivered Terry his world title shot on home soil, he’s now got all the home advantages, and he has to translate that in the ring and beat Zepeda, who will certainly give Terry plenty to think about with that huge knockout punch he carries.

“Saunders is hot on the heels of a showdown with Andy Lee for the WBO World title next so he’ll be looking to be at his best.  For Paul this is his comeback on the big stage and he’s going to want to show that he means business second time around.  Liam is one of the most exciting fighters in the country and he’s approaching world class so he’ll be looking for another great showing.  I’m really excited with Jack’s development and he could be the next Ricky Hatton as he brings excitement every time he fights.”

*Ticket refunds for the Liverpool Olympia show can be obtained from going to the original point of purchase.