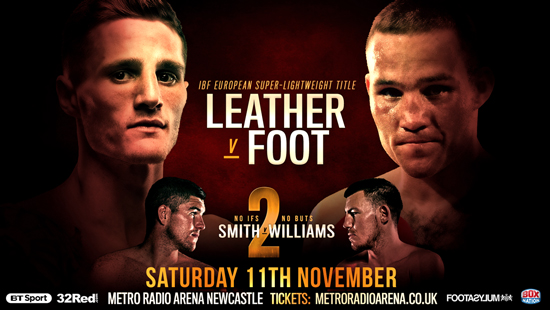 Glenn Foot is gunning for IBF European Super-Lightweight Champion Josh Leather after returning to winning ways in Hartlepool over the weekend.

The Tees-Wear rivals lock horns at the Metro Radio Arena in Newcastle on Saturday 11th November, live on BT Sport and BoxNation.

Foot (21-2, 6 KOs) looked back to his menacing old self as he outclassed Sheffield’s Nathan Hardy over four lively rounds at the Borough Hall on the undecrard of Martin Ward’s European title challenge.

And the Sunderland man didn’t hold back when asked about unbeaten Guisborough Champion Leather (12-0, 6 KOs).

“Josh Leather? He’s beaten nothing but bums,” said Foot. “He’s not fit to lace my boots.

“If you look at our records, I’ve boxed a level above him all of my career. He is going to get the shock of his life on November 11th.

“He’s going to be on the counter looking for me to come forward but they are going to get a big shock on the night.

“Believe me, this will be the biggest test of his life. I’m going to be 100% focused on the night, I’ve got my head back on the job. There is no way I am losing this fight.

“There is much more on the line than just the IBF European title, it’s local pride. This is Sunderland against Middlesborough, and Sunderland are going to come out on top.”

Ricky Hatton-trained Nathan Gorman (Natwich, 10-0) will face Nick Webb (Chertsey, 11-0) for the English Heavyweight Championship in another showdown where someone’s ‘0’ is set to go. Explosive Super-Middleweight Mark Heffron (Oldham, 16-0) another of Ricky Hatton’s excellent young stable of fighters, will also be in action on the card; undefeated Jeff Saunders (11-0) of Sedgefield takes on undefeated Liverpudlian Steven Lewis (14-0)