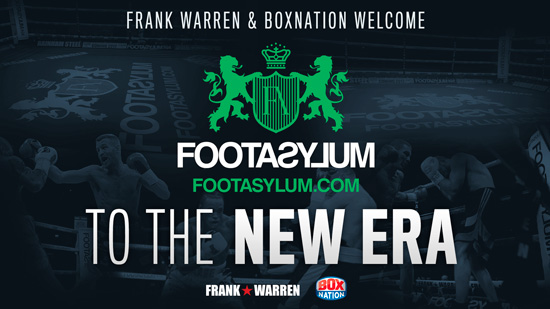 Commenting on the partnership Footasylum’s Marketing Manager Howard Tattersall said: “Our brand is recognised as one of the fasting growing street fashion wear retailers in the land. At Footasylum we have our finger on the pulse of the street and sports fashion scene, our association with Frank Warren and BoxNation is further demonstration of our connection with Sports, Fashion and Live sport.”

Footasylum was established in 2005 and now trades from over 55 high street stores across the UK.

Commenting on the deal Frank Warren said: ‘’Following the announcement that our major events are now going to be shown live on BT Sport we have had many approaches from leading brands. Having met the guys from Footasylum it is clear that they share our vision and recognise our respective audiences mirror each other. Footasylum have some exciting plans for our relationship and we look forward to delivering World class shows with them.’’

The first event Footasylum will be sponsoring will be on April 8th at the Manchester Arena, which is aptly billed as ‘A New Era’. Main event on the unmissable card sees Manchester’s Lightweight World Champion Terry Flanagan defend his crown against Petr Petrov, also Liverpool’s Liam Smith will take on Liam Williams for the WBO Interim Super-Welterweight strap,  as well as the long awaited debut of the Double gold winning Olympian Nicola Adams OBE.