Footballers have always had an affinity with boxing – and we are not talking on-the-pitch handbags-at-ten-paces here. More a genuine passion for the fight game as fans and sometimes as those, like Wayne Rooney, who had their origins in the sport.

Not only do you frequently see familiar football faces at ringside but even occasionally inside it, where ex-players Curtis Woodhouse, who became British light-welter champion, and Leon McKenzie (son of former British and European champion Clinton and nephew of three-weight world kingpin Duke) have made successful transitions.

Rooney, son of a former boxer, was heading for a promising ring career himself before he cut it short as a young teenager when faced with a decision between fighting and football. 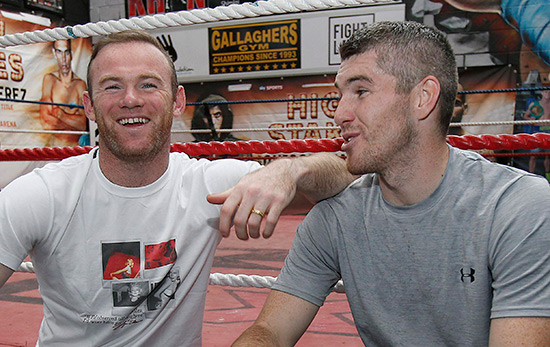 The round ball ko’d the punchball otherwise, who knows, it might have been Warrior Wayne challenging for a world title instead of cheering on his Mersey mate Liam Smith via BoxNation from the England training base last night.

The England captain certainly has never lost his love of boxing. He’s been a fan since he started primary school, always watching the big fights on TV.

He trained with the dream that he might one day make it as a professional if he did not break through in football. “All my life – from the ages of six, seven and eight – when big fights were on television, I used to stay up with my dad to watch them,” he says. “I’ve always loved watching boxing and I went boxing training for about three or four years when I was younger.

“It’s a sport I’ve always been involved in. I was doing both boxing and football training at one stage when I was about 15. But Everton, who I was with at the time, said I had to concentrate on one of them and I opted for football.

“But I do think my boxing training was beneficial in my development as a footballer, especially breaking through to the Premier League at such a young age.”

Mind you, shouldn’t this have come in handy when Wayne was supposedly knocked out by former team-mate Phil Bardsley when playfully sparring in his kitchen? But apparently they were just two mates ‘having a laugh!’

Rooney reveals that Man Utd players even have their own Fight Club – a sort of fistic appreciation society where they watch old and recent fight videos.

The latest member is Dutchman Memphis Depay, their £25 million summer signing from PSV Eindhoven who has a full-sized ring installed in his home.

More and more football clubs, like several other sports, are embracing boxing training routines into their pre-match preparations.

Maybe this is something the England rugby team should have considered, too, because despite all those assorted bent noses and cauliflower ears, there wasn’t much aggression against the Aussies, was there?

Every (boxer) dog has his day

Some boxers themselves have an affinity – with other boxers. The four-legged variety that is.

Boxer dogs seem to be the favoured pets of quite a few fighters. I know of those who have named their pugilistic pooches Bruno, Tyson, Lennox. Henry (after Sir ‘Enry’), Joe (after Louis) and Floyd, after you-know-who.

George Groves was pictured with his last week. He tells me he’s called Maddox, which hardly has a boxing ring about it. But George explains:”I wanted to call him Gennady but my dad pointed out I may fight Golovkin one day and he may be compromised!”

Actually boxer dogs, fierce as may appear, are usually the gentlest of creatures, like their owners!.

Oddly enough the only one I know named after Ali belonged to me! Like the great Muhammad, he was a true champ

That was some years back and since then we’ve had five more – all females. The latest is TJ – though I suspect had she been a he it would have had to be called AJ.

A footnote – literally – on those odd injuries to boxers we mentioned here recently. Frankie Gavin has pulled out of his British welterweight title fight with Sam Eggington because a car ran over his foot as he stepped off the kerb in a Birmingham street! 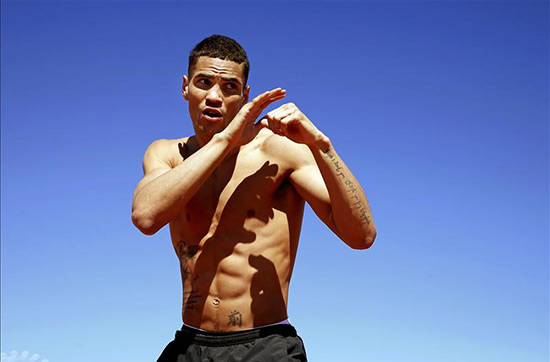 However it is good to see that Anthony Ogogo, whose assorted career-hampering injuries have included a torn Achilles, has recovered well and is still tripping the fight fantastic in Strictly.

It is 11 years since former British heavyweight champion Danny Williams caused a global sensation by shelling and stopping a washed-up Mike Tyson is Louisville, but Brixton’s old soldier marches on at 42, still campaigning in places such as Latvia, Russia, Abu Dhabi and the Crimea. He’s now had 74 bouts, and loses far more frequently than he wins, though he has been successful in his last two in the Czech Republic.

I mention this because on Thursday evening he returns home to the Lynn Boxing Club in south London, where he began as amateur, as guest of honour when the Lynn and Southwark Met Police join forces in a unique project aimed at reducing re-offending by young people from within the borough. 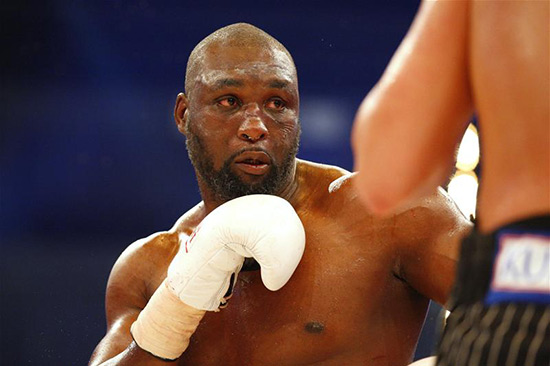 Following a number of similar projects, based in the club which have had positive outcomes, the Met Police identified boxing and the Lynn as being ideal partners to attract and engage with young people who live on the margins of risk and re-offending.

The partnership is underpinned by the Southwark Youth Offending Team and has attracted £28,000 of funding, which will deliver sessions, skill and coaching qualifications for the young people involved and will offer them outlets to continue within amateur boxing in various roles.

All are welcome at Lynn ABC, Wells Way Baths, Wells Way, London SE5 0PX for the launch of a programme, which has also been developed with the support of Powerday and the London ABA Development Programme.

Manny Pacquiao, who says he has prayed to God for guidance and will definitely retire following his next fight, has arrived in Qatar to watch the AIBA World Boxing Championships, the finals of which will be screened by BoxNation.

He is the guest of the omnipotent Dr C K Wu who has strongly indicated that he might seek a fourth term as International Boxing Association (AIBA) president as he wishes to push through further reforms in what used to be known as amateur boxing, but is now professional in all but name.

Perhaps he is seeking a few fighting tips from Pacquiao, for I hear on the gloved grapevine that Il Presidente may be limbering up for a legal fight with some of the sport’s professional bodies, who are less than enamoured by what they see as an encroachment on their territory.

This is a scrap we look forward to with as much relish as Golovkin v Lemieux and Cotto v Alvarez in the coming weeks.

What’s in a nickname?

Before they contested the WBO super-welterweight title in Manchester last night American John Thompson and Merseyside’s Liam Smith did a bit of nickname-calling. 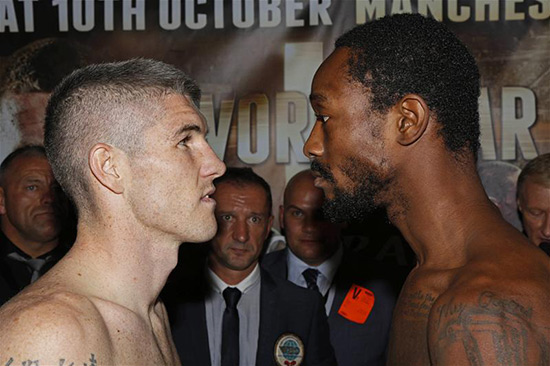 The obviously erudite Thompsons sounded is if he was in the pseud’s corner as he explained at length why he is tagged ‘The Apollo Kidd.’

“Kidd is spelled with two Ds,” he emphasised, “and while I am not a child, I am youthful at heart. Apollo comes from the God of Light. Apollo is also very talented, as I am, and Apollo also comes from Apollo 11 1969, when Neil Armstrong stepped on the moon and said ‘This is one small step for a man, one giant leap for mankind.’ That opened up doors for everybody. not just myself. That doesn’t just go for me, that goes for my family, and for others.”

Liam Smith’s nickname is Beefy and his explanation was rather more succinct. “It’s because I was fat when I was a baby,” he said.

Money, money, money…Don’t tell me money doesn’t motivate you. When you are in a hard sport like boxing and you are in a position where people want you, you start changing.

James DeGale explains why he is now such a Material Man