FOR EARLY BIRDS AND NIGHT OWLS – BOXNATION AT THE DOUBLE 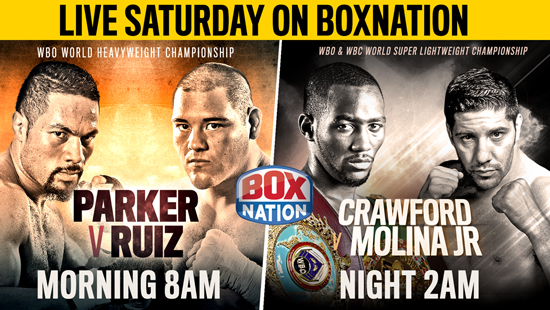 There is a tasty double helping of boxing for fight fans to feast on this weekend and on Saturday morning there is even the option of boxing for breakfast.

BoxNation has got something for the early birds and the night owls this week, with viewers able to tune in from 8am on Saturday for the intriguing heavyweight title fight between Joseph Parker and Andy Ruiz jnr.

It is the start of the world heavyweight title jigsaw being pieced back together in the wake of Tyson Fury relinquishing his belts, for the time being.

Parker and Ruiz square off in Auckland for the WBO version of the title and it is a significant fight for us because it has already been decreed by the governing body that the winner must defend within 120 days.

The two names in the frame are David Haye and Hughie Fury. With Haye otherwise engaged with an early March date already in the diary, this opens a door for Hughie to step into the world title picture in the spring and we will be on the case as soon as an arm is raised in triumph at the Vector Arena.

Parker has created considerable ripples on the heavyweight waters since entering the scene in mid-2012 and subsequently recording 18 KOs from his 21 fights. He has learned the ropes and gone about his business fairly quietly and without too much global fanfare, but has done so against a decent level of opposition and hasn’t taken any shortcuts.

Ruiz, although not a natural looking athlete by any stretch, is unbeaten in 29 fights and is deceptively nimble for someone who has entered the ring previously appearing a little portly around the middle.

The fact that he has the promotional might of Bob Arum behind him tells us that he has got something about him, as Uncle Bob never messes with mugs.

My good friend Bob turns 85 this Thursday but he doesn’t miss a trick, and has shrewdly done a deal with Parker’s people to co-promote the New Zealander in future. Talk about hedging your bets.

But my hunch goes with Parker, who is a solid puncher with a good engine, strong and a typically tough Kiwi.

He will also enjoy home advantage, which could well help in swinging it for him.

BoxNation then heads from an early start to the early hours when the live feed switches to Nebraska for Terence Crawford’s defence of his WBO and WBC super lightweight titles against John Molina.

It is well documented that I am a big fan of Crawford and, having pretty much cleaned up in this division, I wouldn’t imagine it will be too long before he ventures into welterweight territory.

Molina has mixed in good company and, I believe, is no relation to Eric Molina, who is the latest to be placed in front of Anthony Joshua this weekend. In fact, John Molina would probably give Joshua a tougher fight than he will get in Manchester from the other one.

Only the WBA title will remain unaccounted for by close of play on Saturday night, when Parker and Ruiz will have sorted out the WBO pecking order and Joshua a certainty to retain the IBF.

It is just a shame that the best heavyweight in the world is not fighting but, like it or not, he will be back soon enough.

The worst kept secret in boxing was finally revealed last week with the announcement that GB boxing performance director Rob McCracken will be officially be in the corner of Anthony Joshua from now on.

Everybody in boxing knows he has been training him all along, while also carrying out his duties with the elite amateur squad in Sheffield. Of course, Joshua has had a long association with him having come through the system, but he is now a highly rewarded professional who benefits from free sparring and state of the art facilities that are not available to other young pros.

Essentially, the training and preparation of Joshua is taxpayer or lottery funded and this doesn’t sit quite right with me. When the next member of the GB team turns over will he or she be offered a place in McCracken’s pro stable?

It is an obvious conflict of interest that UK Sport should be called to account for. The facilities and expertise in Sheffield were put in place, at a considerable cost from public funding to nurture potential Olympians, not to train world champions in the pro ranks.