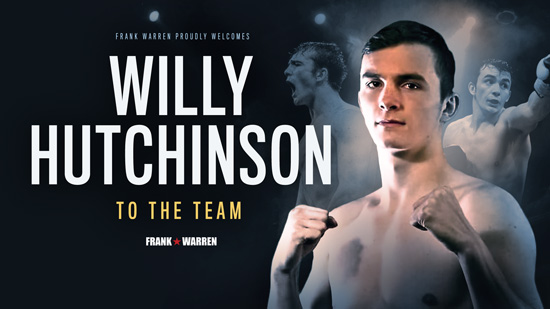 Willy Hutchinson, the most promising young boxer in Scotland, has signed a promotional deal with Frank Warren.

The 19-year-old Light-Heavyweight from Carstairs currently stands at 3-0 (2 KO’s) since making his professional debut against Attila Tibor Nagy at The O2 in October 2017.

He is Scotland’s most successful amateur boxer having won European Junior gold in 2014 before following that up by becoming World amateur Champion in 2016, becoming the first Scotsman ever to win a World amateur title.

Hutchinson, trained by renowned coach Dominic Ingle alongside undefeated WBO Middleweight World Champion Billy Joe Saunders, is looking forward to making his debut under the Warren banner on the undercard of the blockbuster IBF Featherweight showdown between Lee Selby and Josh Warrington at Elland Road on May 19.

“I’m thrilled to have signed a promotional deal with Hall of Fame promoter Frank Warren,” said Hutchinson. “I’m still learning, and learning as much as I can, but I’m extremely fit at the moment and I’m ready to do the job on May 19.

“Fighting on the undercard of such a huge World title show at a football stadium will be a brilliant experience for me. I have faith that I can go all in the way in this sport. I have a fantastic team around me, so if I keep my head down and keep doing what I’m doing, I’m sure I can become a World Champion.”

Frank Warren said: “I’m delighted to have done a deal to add Willy Hutchinson to our ranks. Managed by Shelly Finkel and co-promoted by Richard Schaefer, Willy has an outstanding amateur pedigree and I’m confident that he will be a huge success in the paid ranks. He has an exciting future ahead of him and I look forward to seeing his career develop on our forthcoming shows.”