FOSTER SIGNS FOR QUEENSBERRY AND DEFENDS BRITISH TITLE AT STEVENAGE 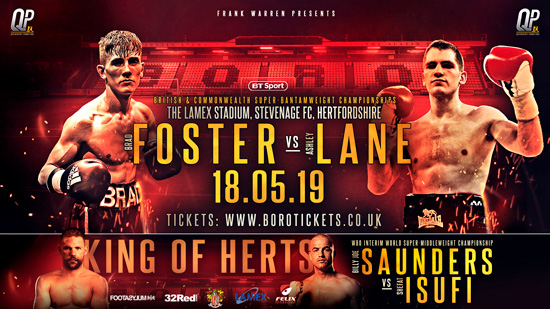 SUPER BANTAMWEIGHT champion Brad Foster has signed a promotional agreement with Frank Warren and Queensberry Promotions and will defend his title against Commonwealth champion Ashley Lane at the Lamex Stadium, Stevenage on May 18.

Foster v Lane for the British and Commonwealth titles is added to a stacked card headlined by the WBO Interim world title clash between Billy Joe Saunders and the No.1 ranked Shefat Isufi and heavyweight contender Joe Joyce having his first fight under the Queensberry banner against Alexander Ustinov.

The Lichfield-based Foster, 10-0-1, won his British title via a convincing points victory over the experienced Josh Wale on away territory in Barnsley back in March.

In his previous fight the 21-year-old won the vacant Midlands Area super bantamweight belt following the retirement of the then unbeaten Leon Gower in round eight.

The former champion kick boxer has clocked up three stoppages from his 10 wins to date.

“Signing with Frank is a step up for me and the chance to get me out there a bit more because I am a British champion now,” reacted Foster to the career development.

“Being with Frank Warren is going to get me more exposure. I am fighting on the Billy Joe Saunders undercard and that is a dream come true for me really.

“He will take me from my British title to however far my talent will take me and my job now is to keep working hard and keep on winning, then I will carry on progressing and move up the ranks.

“Hopefully I will be at the top one day,” added Foster, who acknowledges that he has come a long way in a short space of time.

“It still hasn’t sunk in to be honest. I am just Brad from Lichfield, but if I keep on believing in myself then the sky is the limit really.

“Ashley is Commonwealth champion and I am not going to take him lightly. He will want to win the British title because everybody does and my job is just to stop him and pick up the Commonwealth on the way.

“I have looked at him to see his style but I try to focus on myself and to make sure I am the best I can be on the night. The best Brad will beat Ashley Lane.”

Bristol-based Lane, 28, is on a six-fight winning streak, a run that featured his Commonwealth title success against Michael Ramabeletsa in September 2017, who he defeated on points and reversed a previous career loss.

“I am very excited for it and it is going to be a great fight between two good kids,” said Lane, who holds a record of 13-8-2. “On paper it looks like it could go either way.

“I’ve only watched two of his fights and, to be honest, he looked good with very nice movement and a good boxing brain, but not really much power from the look of things.

“I just go into every fight looking to enjoy my time in the ring, have fun and look after myself. Winning and losing is just part of the game and is a process. I always go in there to win but, at the end of the day, having fun and enjoying it will get the right results.”