FRAMPTON BETTER THAN EVER 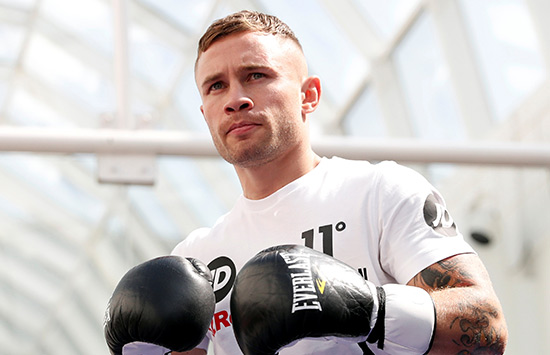 NEW: Our fighting talk feature on what’s said and done inside – and outside – of the ropes, this week featuring the reuniting of Ryan Garner and Carl Frampton, as well as Josh Warrington on turning down a night on the bash in Belfast…

THANKS TO THE intervention of a mutual friend, Carl Frampton drafted in a familiar face for sparring duties as his preparations for this weekend’s WBO Interim world title defence against Luke Jackson neared a conclusion.

The Jackal roped in the Piranha once the connection was re-established between the pair after a call was put in to the two-weight world champion by one of his sponsors.

Southampton featherweight Ryan Garner previously worked extensively with Carl ahead of his second meeting with Leo Santa Cruz in January of 2017 and, having made a favourable impression on trainer Jamie Moore, further trips north to Manchester are now firmly on the cards.

“Somebody we know down here is a sponsor of Carl and speaks to him all the time,” revealed Ryan, taking up the story. “He has got his own gym and we train at his house and it went from there when he asked Carl if he needed any sparring.

“We went up there a couple of weeks ago on a Monday and did six rounds then. They were really impressed again and Jamie Moore got me down there on the following Monday and we did another eight.

“Carl knew me from before, but it was the first time Jamie had seen me and he said from that sparring, if he had known what I was like he would have got me in way before then.

“He said they had been sparring top people but I was much better work than them and they would have kept me up there for a couple of weeks,” added Ryan, who was told by the sponsor from Onecom telecoms that Carl predicts only good things ahead for the 7-0 Saints snapper.

“Carl said he has never been so certain over someone becoming a world champion.

“It is good to hear that from someone who has been there and done it himself, isn’t it? He knows what it takes and whether someone is good enough because he has been around and knows the game inside out.”

Based on what he has seen with his own eyes – and felt with his own chin – Ryan can only see one winner this weekend at Windsor Park despite the bullish approach of the challenger Jackson.

“I have heard what Jackson has said and other people, that since he lost to Santa Cruz he is not the same. I genuinely do not believe that at all.

“I think he is looking better than ever and in real good shape at the moment. We did eight solid rounds at a really high pace going at it and I know Luke Jackson isn’t going to bring what I know I can bring.”

Ryan even detects an upturn in the form of Belfast’s finest since his first encounter with the then undefeated world champion.

“Oh yeah, he seems – like he has said himself – a much happier fighter now. When he was with his previous team he was sparring Monday, Wednesday and Friday doing ten rounds a time and he said it was taking a toll on his body.

“Now he looks in incredible shape – sharp, strong. Mentally too he seems in a better place than what he was before and you could see even at the media workout how sharp he is looking.”

JOSH WARRINGTON INSISTS there isn’t a small part of him that wishes he had signed up to be part of this weekend’s Belfast blockbuster.

The accepted wisdom initially was that the winner of the Elland Road showdown between Josh and Lee Selby would dust himself down and get ready to put the IBF world title on the line against Carl Frampton in the Jackal’s home city.

After his epic display to part Selby from his belt, it quickly became clear that defending it three months later wasn’t going to be an option and, tempting as a domestic dust-up is, Josh says there are no lingering regrets.

“Erm, no, no, I haven’t gone there,” he pondered, although he will be present at Windsor Park on television duty for BT Sport. “Obviously after the fight Frampton laid it on the line saying it appealed to him, but I think I knew I needed a bit of time off because my hand was a little bit sore after the fight.

“Also mentally, to go into camp again, you need to recharge upstairs as well.

“I’ve done a couple of back-to-back camps before and I know what effect it can have on your body so I have learned from that.

“I have worked very hard to get to this level and win a world title so the last thing I want to do is put that at risk by taking an advantage away from myself,” added the Leeds favourite, who knows that going in undercooked would be the quickest way to lose everything.

“Exactly, this world title has put me in the driving seat now and we can afford to look at options. If one of them is to have a bit more time then so be it.”