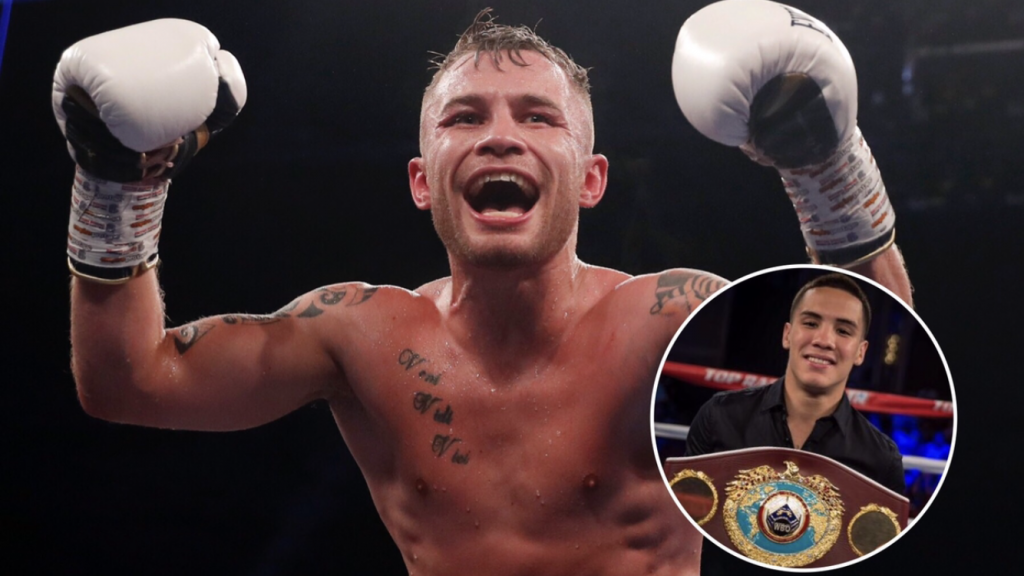 Frampton, who will campaign as a featherweight, will take one of the biggest names in one of boxing’s deepest divisions to ESPN platforms in the United States.

“I’m delighted that we’ve reached an agreement with Top Rank to co-promote Carl,” Frank Warren said. “The enormous platform offered by ESPN in the USA is the perfect place for Carl to showcase he still has everything to offer at the top level. We fully share Carl’s belief that he can become a world champion again. He showed tremendous heart against Josh Warrington in December, and they could well end up meeting again down the line in a huge unification. UK fans can look forward to watching every step of Carl’s American adventure live on BT Sport.”

“It’s wonderful news that Carl Frampton has joined us at Top Rank,” said Top Rank chairman Bob Arum. “He is the epitome of a true warrior, and we are proud to be promoting him as he works toward becoming the featherweight champion of the world once again.”

“It’s an honor for me to be teaming up with Top Rank for what will be the last chapter of my career,” Frampton said. “A credit to my management team, MTK Global, on being able to get me a deal with the biggest boxing promotional company on the planet. It also makes a fight, at some point in the future, with WBO champion Oscar Valdez a real possibility. My goal, at this stage of my career, is still to become a world champion, and I feel I’ll reach my goal with MTK and Bob Arum’s Top Rank in my corner.”

Jamie Conlan, Professional Development Manager for MTK Global said: “Carl Frampton is one of the most gifted boxers the island of Ireland has ever produced and now he’s has linked up with Top Rank, one of the best promotional companies in the game. This partnership will give Carl fantastic opportunities to showcase his talents on the international stage as well as strengthen his quest to become world champion again. MTK Global are delighted to have been a part of this big move for Carl.”

Frampton (26-2, 15 KOs) is a 10-year pro who has fought a who’s who of this past generation’s greatest fighters at 122 and 126 pounds. He won the IBF super bantamweight world title over Kiko Martinez in September 2014, defended that belt twice, and then unified with a well-earned split decision victory over Scott Quigg on Feb. 27, 2016. In his next fight, he moved up to featherweight and took Leo Santa Cruz’s unbeaten record away via majority decision. He lost a tightly contested bout to Santa Cruz in the immediate rematch and then reeled off three consecutive wins until his last bout, a unanimous decision defeat to IBF featherweight champion Warrington in one of the best action fights of 2018.