FRAMPTON POINTS THE WAY FOR BEEFY 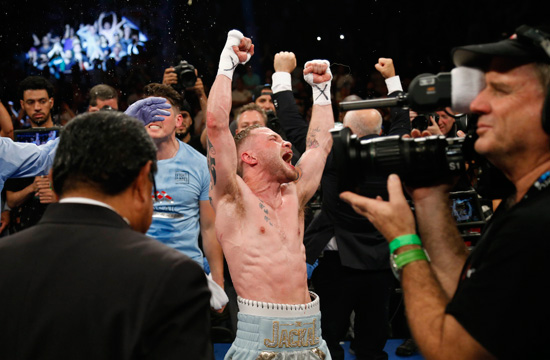 Over the years there has always been the nagging worry when British boxers head Stateside that the scoring of fights can be somewhat haphazard, resulting in a long-held dread of trusting the judges to correctly deliver a verdict.

Times are changing though and the old line about needing a knockout to get a draw now thankfully features less on the commentary crib sheet.

Carl Frampton clearly held no fears over going the championship distance against Leo Santa Cruz at the weekend and probably fully imagined that was the way the fight would go when two world class operators come together.

Eyebrows, however, were recently raised when it emerged that Amir Khan was not actually winning by the margin most of us imagined when his night was abruptly curtailed by a Canelo right-hander at the T-Mobile Arena in May – one had him a point adrift.

It led to some questioning the wisdom of exporting a further consignment of British beef for the consumption of Mexico’s finest. I don’t reckon Liam Smith should have any concerns on that front when he heads to Texas in September.

Beefy, like Frampton, takes the initiative in fights, takes it to his opponents and such an approach generally finds favour with judges. Alvarez is much the same and if it does go to the cards then I’m sure we will have witnessed an epic encounter.

Maybe Frampton getting the nod from two of the three wise men on duty at the Barclays Center is a good omen for Liam, with even Frampton himself describing the winning margin prescribed by one of the judges as a touch generous.

But it has more to do with the fact that Carl is a quality fighter – and so is Liam, who will also go into his fight with the bookmakers’ odds favouring his opponent.

There have been some other notable successes for British fighters in the US over the not too distant past, with probably my personal favourite being Joe Calzaghe’s defeat of Bernard Hopkins at the Thomas & Mack Center in 2008.

Hopkins was back then – and proved himself again after – a top-notch fighter and was clear favourite to put a first defeat on the card of Calzaghe. But, once again, Calzaghe proved himself to be no Ordinary Joe, climbing off the canvas in the first round and going on to claim victory by a split decision.

Two of the judges scored it relatively comfortably in Joe’s favour with the other, Adalaide Byrd, giving it to Hopkins by a round. Strangely enough, it was the same Byrd who had Khan losing by a point when he was clumped by Canelo.

What isn’t in doubt is that we are exporting a higher calibre of fighter on overseas assignments these days and also expecting them to win. There have been occasions over the years when people have worked their way into mandatory positions and simply taken a chance just to fight for a world title, with little in the way of expectations back home.

Nowadays our fighters can compete with the very best and, more often than not, they come off best too.

So congratulations are in order to Carl and his team and we were delighted to feature the fight on the Channel of Champions, with the pride of Belfast now having won two world titles at two different weights live on BoxNation.

One striking stat was also preserved on the night in that trainer Shane McGuigan has still yet to be on the losing side since taking up corner duties. Carl clearly worked his gameplan to perfection in New York, managing to stifle the usually prolific punch output of Santa Cruz, while at the same time landing telling shots of his own.

It resulted in a defining win that now jumps the Jackal into the money league in terms of big fights. A rematch with Santa Cruz is an inevitable option and, with Carl now being an even bigger draw in Ireland, a Belfast bash with Lee Selby is there to be done.

It is a pity he has pretty much ruled out Guillermo Rigondeaux from his future plans as everyone likes to see the best taking on the best. Money and not wanting to be involved in another stinker after the damp squib against Quigg were the reasons put forward, but when a fighter doesn’t want a fight, it is usually because he simply doesn’t fancy the job.

Wouldn’t it be interesting if Rigo does move up soon and the WBA quickly install their current 122lb king as mandatory challenger to their featherweight champion?