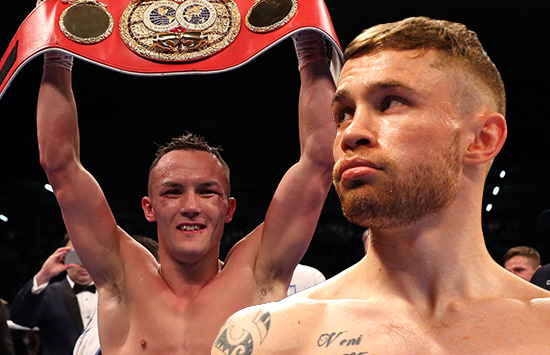 CARL FRAMPTON insists he will be ready for IBF world champion Josh Warrington after achieving his dream of fighting at Windsor Park.

Frampton is the star turn at Belfast’s famous football stadium when he defends his interim WBO featherweight title against Luke Jackson (16-0) on Saturday August 18.

If he comes through against the unbeaten Aussie on the card that is close to a sell-out, an opportunity to win a fourth world title will be delivered by promoter Frank Warren.

Frampton (25-1) has previously held the IBF and WBA super-bantamweight crowns and the WBA featherweight title.

Although Frampton is also eyeing WBO king Oscar Valdez who is currently sidelined by injury, English rival Warrington is also promoted by Warren and a fight that could happen in the autumn.

Frampton, 31, said: “The plan after Jackson is Oscar Valdez or Josh Warrington, which would be the easier to make because we are both promoted by Frank Warren.

“Warrington and myself is more appealing to British sports fans, but It doesn’t matter who I face.

You could flip a coin to decide whether it is Warrington or Valdez.”

Frampton’s eventual target is a rubber clash against Leo Santa Cruz who he defeated two years ago, but lost against on points in a rematch six months later.

Santa Cruz has been reluctant to face ‘The Jackal’ for the third time, but Frampton says:

“If I beat Jackson, then Warrington or Valdez I will have a title and that puts me in a stronger position, and ready to tackle Santa Cruz.

“That might make him want to come to the table, negotiate and talk about the fight again. That is the fight that appeals to me more than any other.”