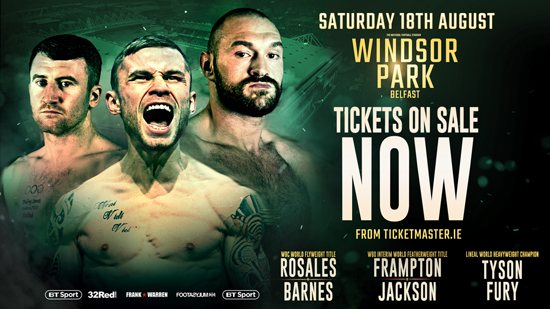 Frampton will defend his ‘interim’ WBO world featherweight title against Australian Luke Jackson, who is ranked ﬁfth in the world.

It is a huge occasion for Frampton and he hopes victory will set-up a showdown with IBF champion Josh Warrington.

Lineal World Heavyweight Champion Fury will box a non-title ten rounder in his second comeback ﬁght and is on a mission to conquer the world.

Frampton’s close friend Barnes will challenge for the WBC World Flyweight title in just his sixth professional contest when he faces champion Cristofer Rosales, who will making his ﬁrst defence.

A talent stacked undercard will be announced by promoter Frank Warren in the coming weeks featuring some of the big names and emerging stars in world boxing.

Don’t miss out on your chance to get your hands on the hottest tickets in boxing before they sell out.