FRANCIS WARREN: “VIJENDER SINGH WOULD ALREADY DRAW OVER 12,000 IN INDIA,”

Expect Indian ring sensation Vijender Singh to further expand his already bulging fan club when he fights for the second time as a pro at Dublin’s National Stadium on Saturday. 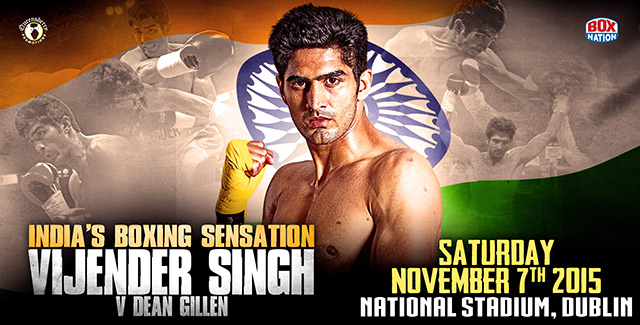 With over 20 million TV viewers from the sub-continent tuning into the middleweights three round mauling of Sonny Whiting at Manchester Arena, Singh clearly has the talent and background tale to evolve into a huge ‘crossover’ star right across the globe.

Born into poverty in Bhiwani, the 30 year old made the podium at the Asian Games, Commonwealth Games, World championships and in 2008, delivered India it’s only ever Olympic boxing medal when he struck bronze in Beijing.

Subsequently, the college graduate is currently a Deputy Superintendent of Police in his native Haryana and has moonlighted as a catwalk model, reality TV star and Bollywood actor back home but the time has dawned to expose him to Indian exiles further afield.

Presently, there are just under one and a half million Indians residing in the UK, with major communities in all of Britain’s leading fight cities such as London, Liverpool, Manchester, Liverpool, Cardiff, Glasgow and Belfast.

‘In addition to Saturday, we’ll be getting Vijender out again on our Manchester bill (December 19th). At the moment most of his learning and development are taking place in the gym,’ says Francis Warren from Queensberry Promotions who showcase his fights.

‘But by his fifth or sixth fight, we’ll be looking to put him on in some form of title fight – perhaps WBO Asian – before 20,000 at the Ghandi Stadium in Delhi. We’re confident he’d draw 12,000, if we put him on there now in a four rounder! And he’s eligible for the Commonwealth title so that would be a logical next step.

‘There’s huge demand back in India. Already Vijender has 1.5 million followers on his Face book fan page, looking at his videos. In India, cricket is obviously the number one sport, but its stars such as Sachin Tendulkar and MS Dhoni are team players. Vijender is an individual and kids love someone who stands out.

‘After becoming India’s only ever boxing medallist in Beijing, there was huge disappointment that he would not be a part of India’s Olympic team for 2016 but we’re going to help make him India’s first ever world boxing champion. He may be well mannered and softly spoken but he carries serious punching power at either middleweight or super-middle.’

Watch Vijender’s fight on the ‘Second Coming’ bill from Dublin’s National Stadium this Saturday, live and exclusive on BoxNation, the Channel of Champions, from 5pm (Sky 437/490HD/Virgin 546/Talk Talk 415 or Livesport.TV).