Frank Buglioni: “Expect to hear a few gasps as I deliver a clinical destruction!” 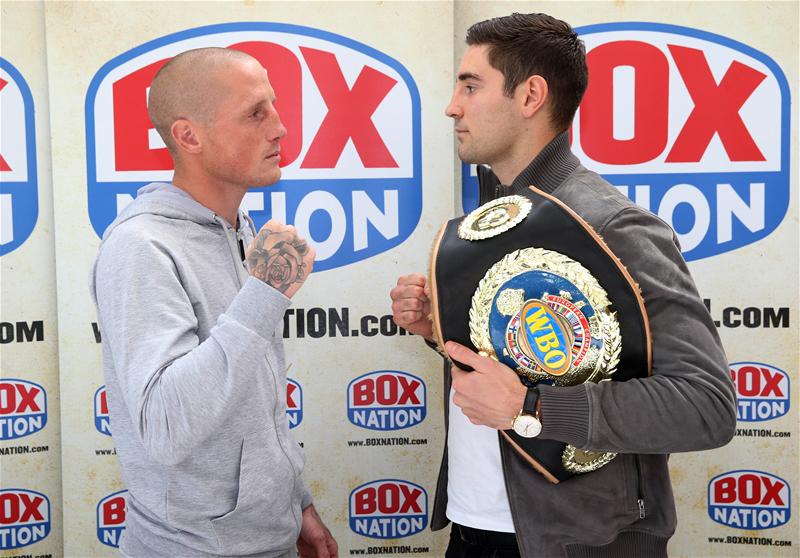 The all action warmongers were former amateur adversaries and their score remains largely unsettled.

“We fought twice in the London Senior Novices when we were in our late teens,” recalls “The Wise Guy”, 26, who has iced 12 victims while compiling a 16-1 pro slate.

“First time, unlike Lee, I’d had a bye in the semis so put it on him from the first bell and beat him on points quite convincingly.

“Next year, we fought in the semis. I just boxed and moved to conserve for the final. He really didn’t get near me but they gave it him. That’s amateur boxing for you. At that stage, it was all about preparing myself for the pros, anyway.

“Back then, Lee was strong, compact, very fit, applied pressure and tried to outwork you. But he was flat footed, could be outboxed and was pretty easy to catch on the counter. His style doesn’t appear to have changed massively since.”

Over the past 12 months, the two camps have been embroiled in some vitriolic exchanges over the social media networks. Next weekend’s set-to provides these proud prizefighters with an appropriate platform to resolve their issues the honourable way.

“The ‘needle’ that developed is nothing personal to Lee,” claims Frank.

“It’s just that our second fight was at his amateur gym (Five Star ABC) which two of the judges were affiliated to. They both voted for him, while the neutral official voted widely for me. I made that public which caused a bit of animosity.”

Lately, the tiff resurfaced in the paid code.

“Initially, Lee turned pro at middleweight so we weren’t rivals and whenever our paths crossed at shows or functions we were always cordial. There was respect,’ stresses Buglioni.

“But after he moved up to super-middle and had a few wins, his camp started using my name to try to get Lee publicity. They put out a ten grand ‘side stake’ bet. We said: ‘Why not twenty?’ They then called on thirty grand. However when we accepted, he suddenly went quiet, deleted all tweets and hit the ‘missing list’. All talk, no trousers!

“Things have cooled now the fight is finally signed but I like a bit of edge, a bit of pressure; it’s more to prove a point, show I’m improving. It’s going to be a very satisfying win.”

Following the withdrawal of headliners Billy Joe Saunders and Chris Eubank Jr, the Buglioni-Markham spat is now likely to provide the showpiece on the SSE bill. Both have shifted barrow loads of tickets and anything other than a brutal shootout would be a major surprise.

“After Lee first won his Masters title a couple of years ago, I started taking more notice, doing a bit of homework,” says Buglioni, once an undergraduate at Westminster University.

“He’ll come forward, look to bury his head in my chest and launch overhand rights; his best shot but not a great shot!”

“I’ve far more options. If he opts to box, that’ll make it very easy for me.”

A former national junior champion and regular England rep, the 6ft 1in pride of Winchmore Hill appears to possess the greater pedigree. However, it’s no secret that he’s rather partial to a ‘bang-up’ to appease his huge and fanatical following. Might this not play straight into slugger Markham’s hands?

“I do like a ‘tear up’ but I’ll be doing it on my terms,’ insists Buglioni who has been preparing for the third time at the Celtic Warrior Gym in Dublin, run by Steve and ‘Packie’ Collins.

“Under the Collins brothers, I’m getting far better on the inside. If that’s the course Lee opts for, it’ll be his undoing. No doubt, he’ll try and hang in there as long as he can, but once I hurt him, he’ll start chucking desperation shots.

“I envisage a one sided war. How long it lasts depends largely on how game Lee is. He’s never been stopped or knocked over yet and if he opts just to survive, it might be hard to get him out of there. But I guarantee I’ll win convincingly.

“I’m technically better and, as one of the biggest super-middles, I’ll have natural size over Lee. I’ve also got the right team behind me.

“The atmosphere will no doubt start lively, but I soon expect his fans to go quiet. Then expect to hear a few gasps as I deliver a clinical destruction!”