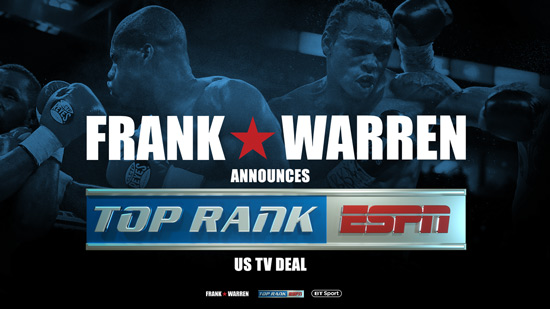 Multi-year licensing agreement will bring the best events from the UK and Europe to boxing fans in the United States and Canada on the ESPN family of networks.

Frank Warren’s Queensberry Promotions and Top Rank are proud to announce an exclusive, landmark multi-year licensing agreement that will bring the best events from the United Kingdom and Europe to boxing fans in the United States and Canada.

“We are committed to securing the biggest and best events from around the world,” said Top Rank President Todd duBoef. “Our long-term objective is to showcase global talent and to expose the next generation of boxing stars. Frank Warren is a legend with a keen eye for building talent, and his, elite stable has proven to resonate with North American fans.”

“I am absolutely delighted and honoured to announce this landmark multi-year deal with Top Rank that will see my Promotions going forward feature regularly on the ESPN platforms in the US and Canada. This was a very attractive opportunity to us due to the level of exposure our stable of fighters will benefit from by being showcased by one of, if not, the biggest broadcaster in Sport. Boxers like Terence Crawford and Vasiliy Lomachenko appear on ESPN, and our boxers will be sharing a broadcast home with them going forward. The agreement will open doors for them to get their name known coast to coast in North America and eventually become stars there.” Warren said.

“The level of exposure, consistency of events being shown and our long and valued relationship with Top Rank will ensure this deal will be a huge success for all involved. US Boxing fans tuning in on ESPN can look forward to seeing competitive match-ups featuring some of the UK’s finest Boxing talent on a regular basis,” Warren added.

Warren, who was inducted into the International Boxing Hall of Fame in 2008, has been promoting cards for nearly 40 years and has one of the sport’s deepest rosters. He has helped turn many of the United Kingdom’s biggest stars into fan favorites across the pond. Ricky Hatton, Nigel Benn, Joe Calzaghe, Prince Naseem Hamed, and Amir Khan all fought under the Warren banner.