Sport lurches from one crisis to another. Just as we were reeling from FIFA gate another alleged scandal threatens to turn those already stormy waters into a veritable tsunami.

Last week I wrote how relieved I was that these days boxing is squeaky clean compared to the massive corruption now being exposed in global football administration. But I wish I could the same about doping, which has reared its ugly head again big-time with the coaching regime overseen in Oregon by Mo Farah’s mentor Alberto Salazar now the subject of a major drugs investigation.

Unfortunately the fight game is not a drugs-free zone. I wish it was.

While nowhere near as prevalent as in sports like athletics, cycling and weight-lifting, it is a growing problem in boxing, and has been for some years.

It is more prevalent in the United States than here because there are many more fighters go through the weight divisions with the need to bulk up. There are those who seem to start their careers at flyweight and the next thing you know they are fighting at light-middleweight!

In recent times Lamont Peterson, Andre Berto, James Toney, Roy Jones Jnr and Fernando Vargas are among those who have tested positive.

During his career there were even rumours about the great Muhammad Ali but these were rightly ridiculed by his trainer Angelo Dundee. “The only thing Muhammad gets high on is himself,” scoffed Angie.

We’ve all had our suspicions about certain celebrated figures but like the Salazar allegations nothing has been proven. It is usually the minnows who get caught as the big fish known how to manipulate the testing system.

According to UK Anti-Doping 19 boxers have failed drugs in Britain in recent years, four of them amateurs. The substances involve range from cannabis and diuretics to steroids. Five boxers are currently serving bans.

These figures do not include the latest fighter to test positive, the unbeaten 25-year-old Commonwealth super-bantamweight champion Kid Galahad (ironically voted Best Young Boxer of the Year before the test result was made public) – as his two year ban is being appealed. He claims his drink was spiked by his brother after a row over money.

The substance involved was banned steroid Stanolozol, infamously the drug of choice of sprinter Ben Johnson in the 1988 Olympics.

Curiously, before Galahad one of the highest profile boxers who failed a drugs test in this country is a woman, Liverpool’s Jade Mellor, two-time ABA featherweight champion who was a 2012 Olympics prospect. She was suspended for two years for trying to make weight with the use of a diuretic.

Among other British boxers who have served bans is the unbeaten heavyweight Dillian Whyte, mooted as a prospective opponent for Anthony Joshua, who he beat as an amateur. He failed a test after using the supplement Jack3D, the same energy-boosting stimulant containing the banned muscle-boosting substance methylhexaneamine (MHA) that had been taken by London Marathon runner Claire Squires before she collapsed and died.

While a tribunal accepted Whyte’s claim that he did not knowingly take MHA, his appeal was rejected because he did not do enough to check the supplement’s ingredients.

Ok, so some like Galahad and Whyte claim they have ingested certain substances unknowingly but the doping authorities say that is no excuse. Athletes have to be responsible for what goes into their own bodies.

How many boxers will be aware that they cannot take over-the counter products like Lemsip, Night Nurse or even a Vick inhaler without risking a doping ban?  For many regular remedies contain stimulants on the proscribed list and some with names only a chemist would understand.

But there is a much more serious aspect to the issue of drugs in boxing.

For, more than any other, it is a sport that dices far too closely with danger without drugs being injected into its inherent risks.

While there are some drugs which are performance-enhancing the danger in boxing is that you are actually hitting someone not just racing against them.

If a fighter is on gear which adds power to his punches it could be life-threatening to his opponent.

Fuelled by steroids or dangerous substances like Human Growth Hormone a gloved fist becomes even more of a lethal weapon.

That is one reason why I am in favour of lengthy bans -even for life if necessary- and more random testing of British boxers, particularly in their gyms.

For any boxer who dopes really is a dope.

Narcissistic is a word that could have been coined for Naseem Hamed but surely he is second only to Ali as the most entertaining fighter of modern times.

So I am delighted that this weekend Naz, now 41 and retired for 13 years, will be inducted into the International Boxing Hall of Fame, in Canastota, New York State. He follows British boxers Jack ‘Kid’ Berg, Randy Turpin, Ken Buchanan, Barry McGuigan, Lennox Lewis and Joe Calzaghe to be so honoured. It is long overdue.

The great pity is that he cannot attend in person because of family illness but he can be sure his achievements will be loudly applauded by the great and the good in the game assembled for the occasion.

Without a doubt he is the most talented fighter I have ever been involved with, and for much of the time, the most fun.

He was the hardest puncher in the featherweight division and certainly the best at his weight ever to come out of this country. 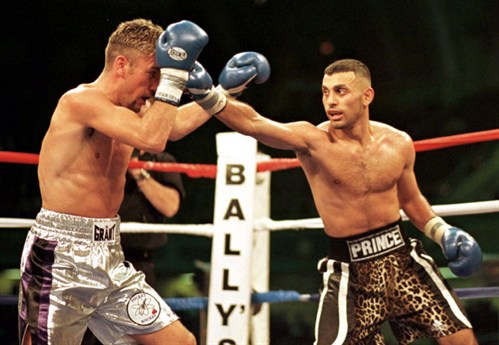 You either loved him or loathed him. There were those who couldn’t stand his bombast but unquestionably he was Britain’s supreme showman, bringing a new generation of fans to the sport with his bizarre ring walks and acrobatic antics between the ropes. He inspired many youngsters to take up boxing.

He was not only superb boxer, but a true athlete.

He brought the game alive but his legacy could have been so much greater had he not elected to go his own way later in his career and fight Marco Antonio Barrera in Las Vegas in 2001, bringing his only defeat, and rather a humiliating one.

He wasn’t in shape and had to lose about two and a half stones to make the nine-stone limit. Had his old trainer Brendan Ingle or myself still been with him I am sure either of us would have talked him out of taking that fight.

The deterioration in his relationship with Ingle was sad. I hear that Naz now says it remains the biggest regret of his career and would love to patch things up. Let’s hope they can touch gloves again.

Naz also admits he misses boxing but adds typically: “But not as much as boxing misses me.”

According to Matchroom overlord Barry Hearn, Anthony Joshua is already the best heavyweight in the world and would beat anyone in the division” including Wladimir Klitschko.” And presumably Deontay Wilder.

No pressure then Josh?

I think that is an unbelievably stupid comment. Great prospect as he is, Joshua is yet to prove he is the best in Britain, let alone the world.

If he really is the best, why is he is still being weaned on has-beens and no-hopers rather than fighting opponents in the top ten?

Cheerleading is one thing. Pressurising another.

I really do like Joshua but to heap so much hype on him at this stage is ridiculous, and could be counter-productive.

As I recall, wasn’t it Hearn who once said that Herbie Hide was the best heavyweight in the world? Whatever did happen to him?

One of my favourite ring gladiators, Miguel Cotto, was back to his thrilling best last weekend, providing BoxNation viewers with a classic exhibition of his punching prowess in demolishing Aussie Daniel Geale to keep his WBC World Middleweight title.

The Puerto Rican now seems set for a showdown with Mexican great Saul ‘Canelo’ Alvarez that could approach Mayweather-Pacquiao in terms of public demand.

Another big-hitting BoxNation treat from New York is in store this Saturday, too, when Madison Square Garden stages the Vacant WBA Featherweight Championship bout between two of the fiercest punchers in the game, both unbeaten.

Jamaican Nicholas Walters defends against Miguel Marriaga, both men carrying 80% plus knockout ratios into the ring. Walters, aka the Axeman, has KO’d 21 of 25 opponents while Colombian Marriaga, known as the scorpion, has clobbered 18 of 20 in quick time.  Walters is favourite but whatever happens it won’t be dull. 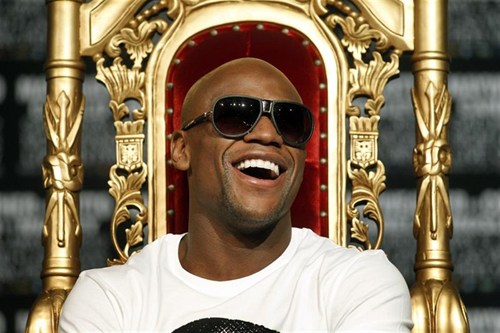 Of course, in that period was the long-awaited and heavily-hyped showdown between Mayweather Jnr. and rival Manny Pacquiao last month in Las Vegas, in which they received reported purses of $120m and $80m respectively.  Not surprisingly Pacquiao landed the number two spot with earnings in the last year of $160m.

Both boxers are set to earn even more from their fight which smashed every financial record in boxing history when all the final accounting is settled.

Both boxers’ earnings blew away football superstars Cristiano Ronaldo and Lionel Messi who came in the third and fourth spot in the list, with Pacquiao earning twice as much as Real Madrid ace Ronaldo. Other sporting giants left trailing behind were Roger Federer, LeBron James and Tiger Woods.