Amir Khan is in a Catch 22 situation in Brooklyn tonight. He could be damned if he dazzles and damned if he doesn’t against Chris Algieri, the American last seen being decked six times by Manny Pacquiao.

A scintillating stoppage over the 31-year-old New Yorker who Pacquiao couldn’t put away but overwhelmed on points may well put the frighteners on Floyd Mayweather Jnr, with whom Khan is desperate to get it on; whereas an indifferent performance could see the Money Man simply shrug and say Bolton’s finest isn’t good enough to share the ring with him should he decide to fight on in September. 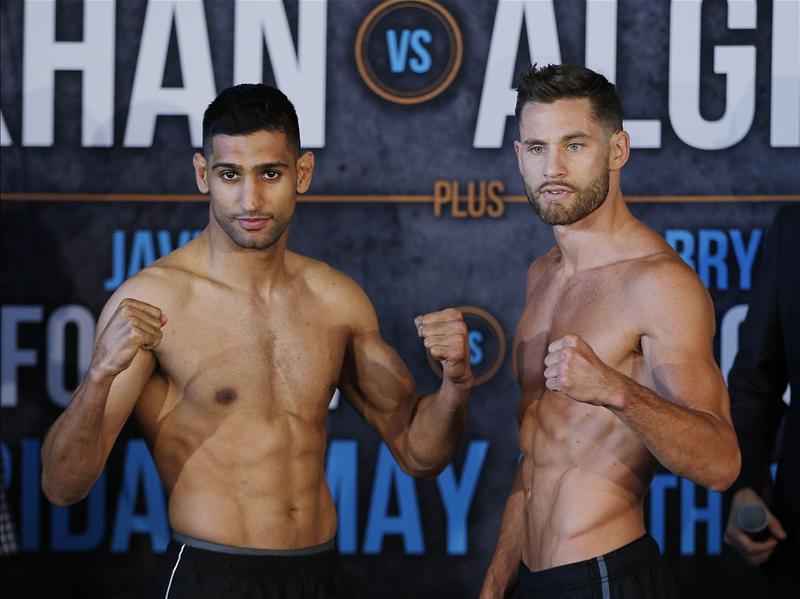 It is a dilemma of which Khan himself is well aware, though he vows he will be doing his utmost to stop Algieri in style in this BoxNation televised welterweight 12-rounder, saying: “If I see the chance, I’ll go for it.  But I’m not going to put myself under any pressure by saying I’ll do better than Pacquiao. I’m just going to go in there, stick to my game plan and win this fight convincingly.”

Quite right. Pulling punches just to convince Mayweather he would be easy pickings as opponent number 49 wouldn’t be fair on Khan himself, or the punters. His main concern must be to emphatically defeat Algieri, whose one loss in 21 bouts was to Pacquiao, and not give a fig about what Mayweather thinks.

Twice before fickle Floyd, a maestro of mind games, has left Khan looking like a wallflower at the local hop after promising him the next dance. It is time he was reminded that it takes two to tango.

However should he take to the floor against Mayweather has other options for partners perhaps more familiar to US audiences including Danny Garcia (who has beaten Khan), Keith Thurman, Lucas Matthysse, Miguel Cotto and Juan Manuel Marquez..

I have always thought anyway that Khan would have a better chance of fighting Pacquiao next year than Mayweather this autumn. But one thing in his favour is that he and Mayweather share the same advisor in Al Haymon, the man who is the new godfather of boxing in the US. If Big Al wants it to happen, maybe he can talk the self-proclaimed Best Ever into it. You never know in this game, but I feel the odds are against it.

I have always liked Khan, even though he sometimes fights more with his heart than his head. He has shown worrying vulnerability at times, notably in his early fights against Michael Gomez and Breidis Prescott, but in his last few bouts he seems to have got his defence in good order under new trainer Virgil Hunter. Hitherto it has been not so much about him being chinny as leaving that jaw exposed.

I signed him after he won lightweight silver as a teenager at the Athens Olympics and made the match when he first became a world champion at light-welter, brilliantly defeating the Ukrainian Andriy Kotelnik, who was no slouch. In that contest Khan showed all his natural God-given talents, particularly that blurring hand speed and quickstepping footwork.

Unfortunately since then he has not really clicked with the British public. My view is that he went to the States too early.  Had he lingered longer over here and built a big fan base, as Ricky Hatton and Joe Calzaghe did, it would have enhanced his marketability.

But I am hoping we will see the best of King Khan as he razzle-dazzles Algieri with all his old panache. Whether this will sell himself to Mayweather is the multi-million dollar question.

What is it with Carl Froch? He barely had a good word to say about history man James DeGale acquiring one of his two forfeited titles, the IBF super-middleweight belt, when working as a TV pundit last weekend.

Indeed, the curmudgeonly Cobra certainly seems to have a touch of venom in his tongue whenever he assesses most other British fighters.  I remember how scathing he has been about Khan, particularly when Amir was picking himself up after the Prescott defeat.

Is it jealously or what?  The Germans have a word for it. Schadenfreude. Taking pleasure from the downfall others.

In DeGale’s case it was certainly no downfall, quite the reverse as the Londoner became the first Briton to convert Olympic gold into a world title with his victory over Andre Dirrell in Boston. Yet Froch labelled the performance ‘disappointing.’

Disappointing?  Surely not quite as disappointing as that of Froch himself was when he fought – unsuccessfully- for the world championship in America against Andre Ward.

I am pleased for DeGale as when he turned pro with me I always thought he would be the first to break that Olympic jinx.

Winning over there was a great result and good for his profile even if the arena was less than half full with the bout commencing around tea-time.

True, had he not taken his foot off the gas he could have finished off Dirrell in style. Sometimes he does seem a bit apprehensive in his approach but he did what he had to do to get a deserved close but unanimous verdict. Though the Canadian judge who gave it to him by eight points (117-109) surely was on another planet.

Britain now has a fistful of world champions in Degale, Carl Frampton, Jamie McDonnell, Scott Quigg and Kell Brook and interim champions Chris Eubank Jnr and Derry Mathews. By the end of the year that figure could be doubled, with title fights coming up for Terry Flanagan, Billy Joe Saunders, Tyson Fury, Anthony Crolla and George Groves.

Additionally there is the triple world title fight bill at London’s 02 tomorrow night when Welsh featherweight Lee Selby challenges for the IBF title against US-based Russian Evegeny Gradovich. I give him a decent chance of a surprise win.

Less so Londoner Kevin Mitchell, who was found wanting in two previous world lightweight title attempts against Michael Katsidis and Ricky Burns. He has a formidable task against WBC champion Jorge Linares, a hard hitter from Venezuela with an impressive KO record.

In the past Mitchell does seem to have been lacking in desire but hopefully he has got his head together after an alcohol-fuelled aberration that almost wrecked his career.

I feel IBF welterweight champion Brook will be too big and powerful for domestic rival Frankie Gavin. I don’t see how Gavin can keep him off as he is not a big puncher and does not appear as comfortable as he was at light-welter.

Overall our remarkable ring renaissance is a timely reminder that boxing in this country is still a major sport and a truly compelling one in which the battling Brits boxers have commendably fought their way to the top of the world.