From Angelo to Ingle: a trainer also needs to be a counsellor and coach

What makes a good trainer? In the old days all he needed was a roll neck sweater, the ability to hold a punchbag while his fighter pounded away and a bike to follow him on his training runs.

But times change. These days boxing trainers are no longer mere bucket-and-sponge carriers. All that went out with flapping towels.

The modern trainer has to be not only a conditioner but a coach, confidante, counsellor and strategist.

It is more about game plans and diet sheets than supervising push ups.

A great trainer must have a mental and emotional connection with the fighter, feeling what his fighter feels, and being able to lift his spirits when the chips are down.

So who are the best in the business – and also the best of all time?

This is the subject of another fascinating debate in a BoxNation special on Monday week. 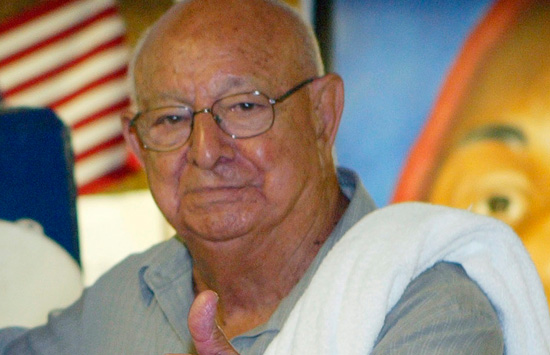 Roach, of course, also schooled Amir Khan for a while, but Amir, now with Virgil Hunter, has got through more trainers than Mo Farah’s feet.

But all top trainers have admitted at some time that trainers are only as good as the fighters they work with.

Ray Arcel, Ricky Giachetti, Teddy Atlas and Cus D’Amato are among other legendary figures who have been inspirational both in the corner and the gym.

As was Jack Blackburn, known as “Chappy,” who trained Joe Louis. A former boxer himself he spent nearly five years in jail before returning to the ring and eventually retiring in 1923.

When Blackburn first met Louis in the early 1930s, he was sceptical about how an African-American would fare in the heavyweight division.

It didn’t take long for Louis to prove himself. With Blackburn in his corner, Louis won the heavyweight title and defended his crown more than 20 times. Blackburn became ill during Louis’ 21st title defence in 1942 and died shortly afterwards.

“I guess I thought I’d be heavyweight champion forever and Chappie would always be with me,” Louis said. “Chappie had been another father, a teacher, and a friend, so when you think about it, I lost three people, not one.”

There are dozens of decent trainers around in British boxing but how many of them are coaches as well as conditioners? Too few, I fear.

The late Terry Lawless, George Francis and Dean Powell were all experts in the art of grooming a fighter’s mind as well as his body, forging bonds which went beyond professional relationships.

Tragically Francis and Powell both succumbed to the pressures the dedication to their work inflicted on themselves, taking their own lives.

Enzo Calzaghe, Joe Gallagher, Adam Booth , Jimmy and Mark Tibbs, Steve Maylett, Dave Coldwell and Peter Fury (who so shrewdly worked out how nephew Tyson could dumbfound and defeat Wladimir Klitschko) all deserve honourable mentions in the BoxNation special for their psychological prowess.

As do Shane McGuigan and Gary Lockett, two of the younger trainers now making a name for themselves, as well as successful GB Olympic coaches Robert McCracken and Terry Edwards.

Unquestionably one of the best boxing coaches Brritain has ever produced was the former featherweight champion Bobby Neill, who transformed the humdrum southpaw style of Alan ‘Boom Boom’ Minter and made him a world middleweight champion.

Neill’s book, simply titled ‘Instructions To Young Boxers’ remains one of the most authoritative teaching manuals in the business.

Trainers and fighters have a unique relationship, built on trust. Terry Lawless used to read chapters from war generals to Frank Bruno to build his fighting psyche.

“You’re like a priest to them, a talisman to them, a father to them, a friend to them. You cajole, teach, and grow very close to your fighters. You’re playing many roles, including psychologist,” says Manchester-based Joe Gallagher, named trainer of the year by Ring Magazine.

But how fights can be won as much in the corner as in the clinches was demonstrated when for once Gallagher was uncharacteristally out-thought by young McGuigan as Carl Frampton out-fought a strangely negative Scott Quigg recently.

Compassion is also one of the greatest virtues for a trainer. Both Dundee and Futch showed it in rerspective world title fights involving Ali.

Futch, a gentle man in every sense, famously told a bloodied Joe Frazier at the conclusion of the brutal 14th round in Manila: ”Sit there son, nobody will ever forget what you did here today”

And five years later, at Caesars Palace in Las Vegas, the great guru Dundee turned from tending a grievously stricken Ali at the end of the tenth round against Larry Holmes, and amid protests from the Ali entourage at ringside, yelled at hesitant referee Richard Green:

“I am the chief second and I stop the fight.”

The doyen of all trainers in the UK has been Brendan Ingle, who helped make Naseem Hamed such a fabulous fighter. 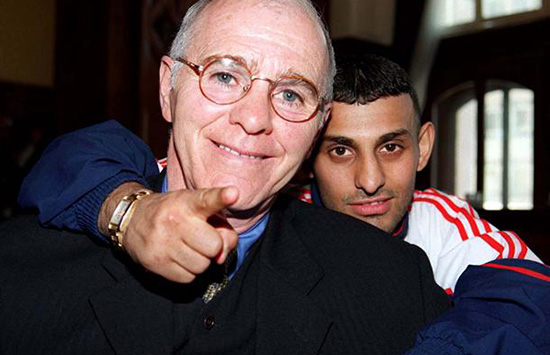 It is now more than half a century since he opened the St Thomas Gym in Sheffield’s Wincobank which has been Britain’s most prolific conveyor belt of hit-and-hop-it champions, among them Naz, Johnny Nelson, Junior Witter and Herol Graham,

There has always much more than boxing blarney about the 74-year-old Ingle who still opens the gym at 6.45 am every morning,, the old church hall reverberating until eight in the evening to the up-tempo beat of thudding fists and the exhortations of the little Irish guru to “dance and move, dance and move”.

Nearly all his fighters have been indoctrinated with the same Ingle philosophy:  “I’ve always said the art of boxing is to hit and not get hit, like Muhammad Ali, fabulous. Boxing has brought me a wonderful life. It’s been a great craic – like winning the pools every day.”

Some 1,000 amateurs and 200 pros have passed through the hands of Ingle and sons Dominic and John at an emporium which, despite its Christian heritage, has a wide ethnic mix and includes many Muslims.

“They come because they aspire to be another Naz or Amir Khan.,” Ingle once told me. “We have open discussions on religion, no holds barred. I’ve trained Muslim kids for years, but there’s more to it than just boxing. I tell them how important it is to get a good education and to be a decent person.

“Yes, we’ve talked about terrorism, and I tell them about the IRA and how we lived through that. Sometimes they mention suicide bombers, though none of them say they condone them, and their belief about going to paradise. I say to them: ‘Do you know where paradise is? It’s here in Sheffield’.”