Unbeaten heavyweight prospect Hughie Fury came face-to-face with his latest opponent ‘Big’ Fred Kassi at today’s press conference at the Savoy Hotel in London. Fury, 19-0 10 KO’s, is gunning for another knockout win on his quest to join cousin Tyson at the very top of the world heavyweight scene. 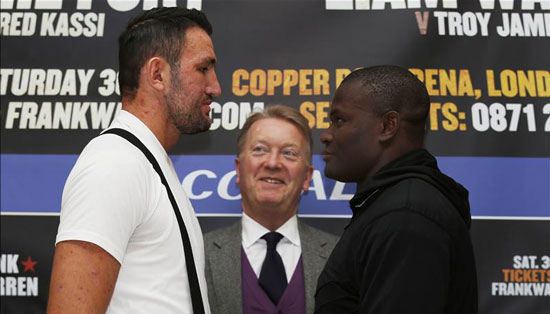 Exciting heavyweight destroyer Fury is expecting a tough challenge in the experienced Kassi, 18-4-1 10 KO’s, and knows he will have to be at his explosive best if he is to bag the Vacant WBO Intercontinental Heavyweight title.

“I’m just happy that I’ve got such a great team in my corner. I’ve learnt a lot form sharing a training camp with my cousin Tyson. I’m only 21 and I’ve already come up against some decent opponents. Kassi is another step up for me. I want these type of fights on my way to the top, “said Fury.

Hard-hitting Kassi has a fearsome reputation with ten knockout wins in 19 career victories; nine of them coming inside two rounds. The New Orleans-based bruiser is capable of mixing things up and is promising to upset the odds against the Mancunian prospect.

Cromer star Liam Walsh finally takes on Coventry’s Troy James in Saturday’s chief-support. The slick southpaw knows he will have to overcome hungry challenger James before setting his eyes on a world title showdown with Manchester star Terry Flanagan.

Walsh said: “I’ve been unlucky with hand injuries but I’m still a very young 29; there’s no rush. I know I’ve got to get past Troy before I get a shot at a final eliminator but he has my full attention and my full respect. He doesn’t get the respect he deserves and I’m expecting a great fight.”

‘Terrifying Troy’, a warhorse unbeaten in three and a half years, has vowed to prize the British and Commonwealth Super-Featherweight titles from Walsh. The pair have been scheduled to fight on numerous occasions but injuries on both sides has prevented a meeting until now.

History-making Ryan Walsh makes the second defence of his British Featherweight title against Belfast ace James Tennyson. After making an impressive first defence against Scotland’s Darren Traynor at York Hall in January Ryan is looking forward to fighting on the same show as his twin brother.

“To be fighting in a title fight on the same show as Liam is special. We’ve both promised each other that we’re going to win and that’s exactly what we’ll do. I worked hard to get this British title and there’s no way I’m giving it up,” said Walsh.

Red-hot Belfast featherweight contender Tennyson is already making waves in his division and will be looking to claim Walsh’s British title before pushing on towards his dream of a world title.

Tennyson said: “Every box has been ticked. I just need to go in there and execute my game plan on Saturday night. It’s important to win on Saturday night, if I win there’s no need to come over to England anymore, there’s some big arenas over in Belfast that I’d love to pack out.”

Ovill McKenzie withdrew from the card due to an injury with his Vacant EBU European Cruiserweight Championship title showdown against Dmytro Kucher now scheduled for June 10th at a venue to be confirmed.