Fury may be right – is Joshua running scared of Wilder? 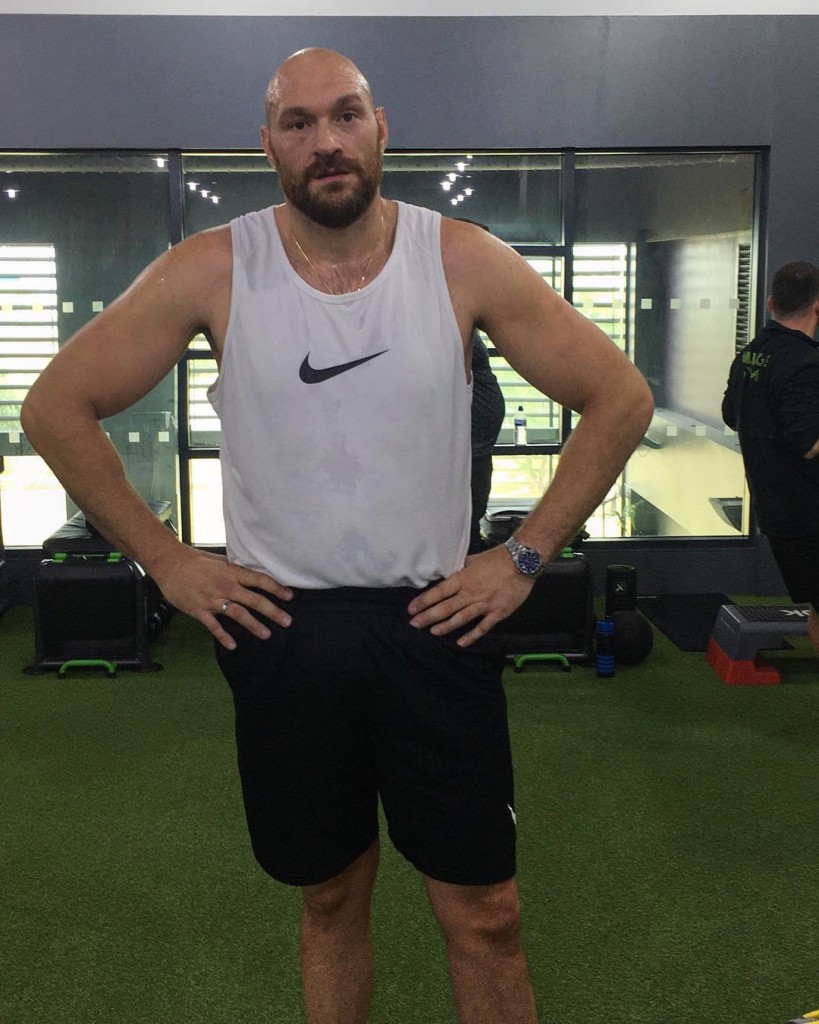 TYSON FURY SEEMS in fine fighting fettle as he prepares assiduously for his second comeback fight against the seasoned Italian-born German Francesco Pianetta on the Carl Frampton bill at Windsor :Park, Belfast on August 18. And that could spell bad news for Anthony Joshua – or maybe even Deontay Wilder.

This week the former champion launched a scathing Twitter attack on multi-belted fellow heavyweight Joshua for a failing to reach a deal to fight the American WBC champion Wilder in a fight which would have unified the division.
Instead Joshua has opted to take on Russia’s Alexander Povetkin at Wembley on September 22.
Fury, who never pulls his verbal punches, suggests Joshua is reluctant tio meet the American and there are plenty in the trade who agree with him. Fury believes the heavyweight division deserves better from their champion, and has ladelled Joshua ‘a disgrace.’
Well, I wouldn’t go that far but I do believe Joshua’s people want to steer him clear of the heavy-hitting Bronze Bomber as long as possible.

Just imagine if I went to America & beat @BronzeBomber or at least had the nuts to try! Unlike some pussys in this country…………. pic.twitter.com/SIO2WrXWjm

Providing he keep out of the way for four or five rounds Joshua should pummel Povetkin.But will Wilder next? Don’t bet on it. I think this is a distinct case of pugilistic procrastination and it would not surprise me to see Fury , with a few more winning fights under his belt, get his chance to meet Joshua before Wilder does.

Alternatively he could engage with wilder himself as soon as he is ready. I hope so because these are fights the world wants to see.. Fury says: “I think it’s such a sad time for heavyweight boxing because you’ve got the so-called super champion and golden boy, Anthony Joshua, and he is avoiding Deontay Wilder and will not fight him at any cost. “If you’re not going to fight someone for £40million, you’re not going to fight him for anything. It’s a disgrace and he’s a disgrace to boxing. ‘And I think it needs somebody good enough to step up and take on the challenges and not be afraid – not be afraid to take risks and go to people’s backyards and do it.’ ‘Can you imagine if I went to America and beat Deontay Wilder in America? After beating Klitschko in Germany?’ ‘It would be sensational. It might happen. Who knows? Wait for the news.’ Indeed, our breath is baited…

WHEN A RUSSIAN and a Ukrainian come fist to face in the middle of Moscow on a Saturday night you would think, as they say in the pugilistic parlance, it would be off at all meetings in view of what happened over the Crimea and all that. But the potentially explosive historic clash between unbeaten cruiserweights Olexsandr Usyk and Muriat Gassivev lurned out to be all sweetness and light; a terrific exhibition of classic box-fighting by the Ukrainian Usyk with nothing but goodwill in the build-up, hugs and smiles like long-lost brothers at the end of 12 fascinating if one-sided rounds and a show of genuine sporting appreciation by the 20,000 plus crowd at the Olimpiyskiy Stadium .

A week after hosting football’s World Cup final, Moscow staged what was virtually a World Cup final in cruiserweight boxing, the culmination of the inaugural World Boxing super Series. There was a certain irony in that it turned out to be between a Russian and a Ukrainian, but, just as in the World Cup itself, the home crowd behaved impeccably. In winning the contest Usyk became the first holder of he Muhammad Ali Trophy, presented to him in the ring by the late world heavyweight champion’s wife Lonnie.

Fittingly the man whose first name translates in Ukrainian as Alexander is now undisputedly the greatest in the cruiserweight division and has a style much reminiscent of Ali, dancing and jabbing and at time seeming to float like a boxing butterfly while landing stinging punches He also happens to share the same birthday as Ali –January 17. The Olympic gold medallist at London 2012, Usyk, 31, came into the bout as the holder of the World Boxing Organisation (WBO) and World Boxing Council (WBC) belts. Gassiev, 24, who was unbeaten in 26 fights before facing Usyk, was the World Boxing Association (WBA) and International Boxing Federation (IBF) champion.

The ring artist from the fistic conveyor belt land of the Klitschkos and Vasily Lomachenko has been one of boxing’s best kept secrets. The slick southpaw is a sensational boxer, with an expert grasp of ringcraft, technically outstanding and, like surprisingly light on his feet for a man off 6tft 3in. He delivered a punch perfect masterclass in to defeat his heavier hitting Russian rival by a wide unanimous decision. After just 15 bouts, the majority of which he travelled abroad to take on fighters in their own backyard, he has become the first fighter in boxing history to hold all WBC, WBA, WBO, IBF and Ring Magazine world cruiserweight world titles. It was the first time the titles had been unified since Evander Holyfield back in the late nineties and like The Real Deal, Usyk is to set to move up and launch an attack on the heavyweight crown.

Interestingly the German-orchestrated WBSS, which in September will feature a super-middleweight final between Britons George Groves and Callum Smith, has introduced a scoring system designed always to produce a winner – never a draw. If the three judges’ cards score it level it will go o a fourth judge to decide. Obviously better than a penalty punch shoot-out! What Usyk has accomplished since turning pro in 2013 is nothing short of remarkable.

Now it is onwards and upwards. Literally. He would certainly give AJ problems. However Usyk says he wants to fight former WBC cruiserweight champion Tony Bellew next, and his challenge has been accepted. The only thing that needs to be decided is when, where and what weight class the fight will be held at. Usyk says he would be willing to face the 35-year-old Bellew (30-2-1, 20 KOs) at heavyweight if he’s not interested in coming down in weight. “If he wants to fight at heavyweight, I’ll just eat more pasta,” he grins. Whatever – Usyk must vie with Lomachenko, Gennady Golovkin and Terence Crawford as the world’s top pound-for pound fighter. As the Russians now know, a new Tsar has been born. And he’s from Ukraine!

LIAM SMITH PUT up a typically Beefy and praiseworthy challenge against baby-faced Mexican sensation Jaime Munguia in Las Vegas last week but came up against a truly talented opponent who has already perfected the art of the two most hurtful punches boxing –a left hook to the temple and a right to the liver.

An incredible battle between two warriors

But while he was bruised, Beefy took his lumps stoically and administered a few himself in a fight that was closer than the scorecards suggested.
Smith can come again – although not I suspect against at young man who seems destined to become one of the all-time Mexican greats of boxing.

WITH SOME RELUCTANCE, and simply because I am a fight junkie, I have just forked out the best part of 21 quid for the Sky Box Office screening of Saturday night’s Whyte-Parker fight from the O2.

To be frank, I think calling this a PPV contest is a dead liberty. It is a meaningless heavyweight bout. Joshua won’t fight the winner because he has already comprehensively beaten them both and it heads a ho-hum undercard. In this case Sky really is the limit.
What was that tale about killing the golden goose…?