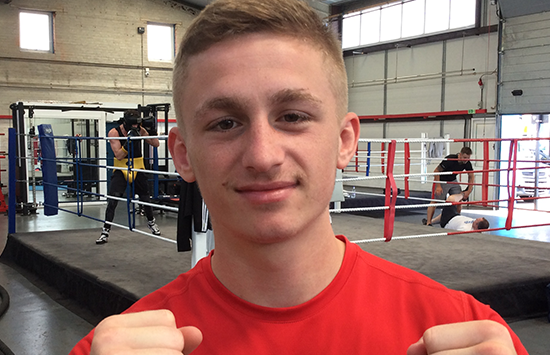 It was a case of normal service has resumed for Ryan Garner last weekend at the Copper Box with his first round slaying of Tamas Laska with just a shade over two minutes on the clock.

The Hungarian – Garner’s first opponent to hold a winning record – has been imported to provide a test for a number of touted prospects in recent times, but none of them closed the show as quickly as the now 6-0 featherweight.

In fact, never before has he been put away in the opening three minutes in his 35 contests to date, but then he had never been pecked at by a hungry Piranha before.

Piranha Garner has got his promoter purring, with Hall of Famer Frank Warren predicting ‘this kid is going to be a little star’.

Warren was saying exactly the same things two months ago when Garner snapped and crackled, but couldn’t quite pop the resilient Spaniard Rafael Castillo in Leeds.

Southampton’s new favourite son threw every shot in the book at Castillo’s head and body but, like Raza Hamza in Leicester a month previously, ended up biding his time and accepting that points too, win prizes.

It was the first and only time so far that the referee has been called upon to adjudicate on the outcome of a Garner fight, but the 19-year-old has no regrets over being taken the distance.

“I thought I had him a few times but, from that fight, I learned more than I have in all of my other fights,” he reasoned. “It showed two sides of me.

“Not getting him out early gave me the chance to show that I can box, showed everyone on the TV that I am not all crash, bang, wallop.

“I think it did me the world of good, that fight.”

Garner insists there were no alarm bells ringing inside his head when Castillo didn’t capitulate under such sustained early attacks.

He had to make a mental adjustment and set about winning in a more patient fashion. It is something he believes will serve him for when he is ready to enter into riskier business.

“The elite fighters can do both. They can mix it and they can box, so that is what you need to do. If you are one dimensional, when you get to the level against fighters who can do both, they will just pick you apart.

“He was tough, durable and willing to stay there and give me a few digs back, which is what I needed.”

The Leeds show marked the occasion of Garner’s debut on the dual platform of BoxNation and BT Sport – something he has since followed up at the Copper Box. It introduced him to a wider audience, while also realising his ambition to perform at the major arenas.

“When I was turning pro that was one of my aspirations, to be on these big shows. My first four, while still on good shows and on telly, were smaller shows, so getting into the big arenas has inspired me to train much harder.

“Frank (Warren) was ringside and, with fighting in front of him, at the back of my head I know I have got to impress him and look good. Leeds was the first show I was on with BT and BoxNation together and I really noticed the difference with the publicity and profile.

“Everyone on Twitter and that was saying how exciting my style is and that it is fan-friendly. I got a lot of good feedback from it.

“All the time now round here people are starting to recognise me and my name is getting spoken about, so the publicity is getting much bigger for me.”

Garner was already something of a young man about town on his home patch, thanks to two shows previously promoted for him in Southampton.

To say he went down a storm would be an understatement and both local venues were packed to the rafters. But, while he enjoyed his home comforts, Garner has got the bug for the big stage and hopes his performances will entice an army of followers to support him up and down the land.

“It was booming, but while I am young I need the exposure as well with the telly behind me, because in the long run it will be better when I am fighting for titles and that.

“It was good being down here because hopefully when I do fight in big arenas, all the friends, family and other people who came to watch me on the small shows in Southampton will come and follow me all over the country.

“Hopefully, one day, I can get a big arena booming like I have the small ones down here.”