GARTON: CORCORAN IS MY TYPE OF FIGHTER! 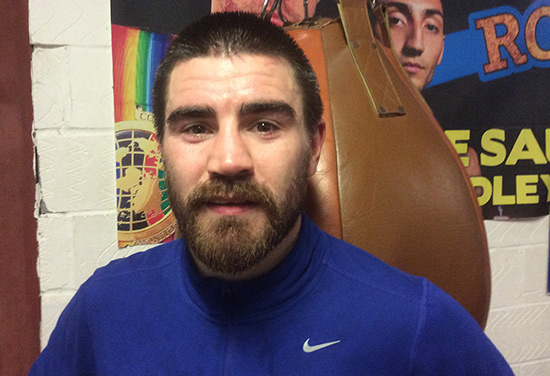 Johnny Garton has been stuck in the British title waiting room for some time now but next Saturday (October 20) the time comes for his shot at the welterweight belt against Gary Corcoran at the Brentwood Centre. The Pexican got stuck in traffic due to his close friend and training partner Bradley Skeete winning the title and proceeding to defend it three times. Then he heard the Penge puncher was set to fight Corcoran and feared the worst, as he reveals in his latest Fighter Diary…

WHEN I FIRST heard about a possible fight against Gary Corcoran it was as an eliminator for the British title and I thought ‘blinding, that will be a good fight!’ And then there was talk suggesting Brad had got it.

While I was happy for Brad because he’s my teammate, I was gutted and a bit upset because I thought I’d have to wait longer. Then Brad decided he didn’t want to defend the belt again and didn’t really see the point.

Now me and Gary have got the opportunity to fight for it.

I have been kept waiting for my shot, but it is not Brad’s fault because he can only fight when he is told. I have waited probably two years though and it’s been a bit of a pain in the ar*e, but it is out of his hands at the end of the day.

A few times in sparring I tried to lay a few digs on him, but we are close friends and I wish him nothing but the best.

I don’t feel any pressure at all when it comes to trying to keep the belt back at our iBox Gym. When I first turned pro we didn’t even think I’d win a Southern Area title and my goal was just to box for that.

I’ve now won the Southern Area, the English, the IBF European and now I’ve got a shot at the British. Obviously, for myself, I want to keep it in the gym and everyone is saying ‘let’s keep it in South London’ but, listen, I have overachieved with what I’ve done in boxing and everyone is proud of me whatever happens.

I am just realistic and, as an amateur, anyone will tell you I wasn’t very good because I was just a scrapper and always coming forward. Pretty much the same as now, but I’ve got more boxing about me than I did then.

So we didn’t think I’d last long at all, but I listened to Al (trainer, Smith) and all the boys in the gym and worked my b*llocks off, basically. It has been hard work and having good people around me, that is what it’s come down to.

I am over moon to be at British title level now. Nowadays you see kids win the Southern Area and then they get a straight shot at the British or English. I didn’t have that, I had to do the Masters, defend the Southern Area twice, fight an eliminator for the English. Then, because of Brad, I had to wait even longer.

I had to do it the hard way, all on small shows earning little money. It is just hard work really – and it’s paid off.

If I pull it off next week it will be like winning a world title for me and beyond my wildest expectations. I remember when I started and I went to my first pro show at York Hall. I saw someone lift that Lonsdale Belt and I fell in love with it there and then.

Since then it has been a dream of mine to win it and I am a week away from having that opportunity.

My trainer has said that the one of me and Gary who listens most in the corner will win and I do believe Al is right there, but this is going one way and me and Gary both know that no matter how technical we try and be, at some point in this fight we are going to stand in the middle and go at it.

And I am more than happy to do that!

Gary likes to come out fast and I am prepared for whatever, all I’ve worked for is a tough night and a tough 12 rounds. Gary is also super-fit and that is one thing we know for sure about him. He is also very strong and game, so we know we are going to do it tough.

I’d say Gary will be the favourite in this fight and I think he deserves to be. He had a better amateur career, he’s boxed at a higher level than I have as a pro and he has boxed better names.

I like Gary and I have no problems with him. At the end of the day he is just who I’ve got to fight and he is my type of fighter. He will fight anyone, he’s game and he comes forward. That is what I like in people.