At today’s official weigh in Gary Corcoran and Danny Butler both made the weight on the scales ahead of their WBO Intercontinental Junior-Middleweight showdown. 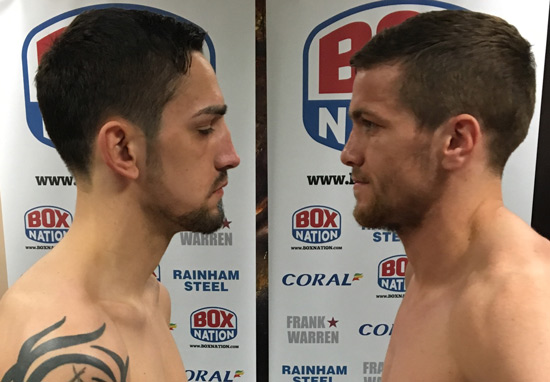 Corcoran, gunning for his first title, hit the scales at 153.3lbs while Butler weighed in slightly lighter at 153.2lbs.

Corcoran said afterwards: “All the talking is done and now it’s time to get it on. I’ve been waiting for this fight a long time now and I’m buzzing to get in the ring. I’ve got a lot of respect for Danny but I’m expecting to win this one comfortably.”

Butler said: “Fighting away from home doesn’t bother me one bit. I’m a strong light-middleweight and quite big for this level, I feel like I can take my power down to this weight and do some damage. It’s a fight that I definitely believe I’m going to win, I wouldn’t have taken the fight if I didn’t think I could win it.”