Southern Area super-feather king George Jupp warns that he won’t be the only fighter stepping up in class when he confronts Harrow Weald’s high-flying Mitchell Smith on Frank Warren’s unmissable ‘X-Mas Cracker’ bill at Manchester Arena on December 19th. 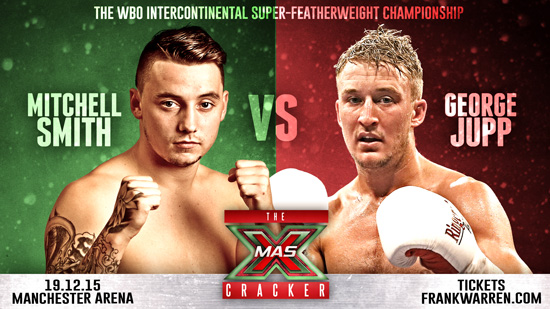 ‘Mitchell’s a very good all rounder, easily my toughest test, but he ain’t beaten anyone great. Who’s he fought? I’m his toughest opponent to date,’ maintains the 24 year old from Belvedere who challenges for his ex spar mate’s WBO Inter-Continental title over 10 rounds.

The rangy 5ft 9½ in stylist not only enters with significant physical advantages over the compact champion but is unbeaten for over four years, having triumphed in each of his last eight gigs.

Particularly merit worthy were an eighth round stoppage of ex English title challenger Terry Flanagan, plus ten round wins over Georgia’s Gia Atenov (one loss in 11) and Lowestoft’s Craig Poxton (8-2).

He showed his mettle by rising from a third round knockdown against Atenov.

‘The Georgian was probably the weakest puncher I’ve boxed. It was just a fluke shot, a balance thing. I was a bit apprehensive that night, jumping up from six rounds to ten but I got a good work out,’ states the one time scaffolder who made the NACYP final and boxed for Young England prior to joining the paid brigade at 19.

‘Winning the Southern Area (against Poxton) was a good achievement but probably my worst performance as a pro. Everything went wrong. I had severe nose trouble from round one, damaged my left hand in round two and really had to grind out a win. I’ll be a million times better, come my big night.’

Coached and managed by ex pro welterweight Derek Grainger at the Ringside Gym in Bow, east London, the 2010 London ABA finalist is chomping for the chance to showcase his skills to BoxNation viewers and a huge live audience next month.

‘I’ll not be daunted. Loads of people have been asking for tickets. I’m really buzzing for it,’ insists the jab and move specialist.

‘I had 11 weeks for the original October 30th date (Smith withdrew injured) and only took eight days out the gym before slowly easing back into it.

‘I’ve done plenty of strength work and we’ll gradually step back into the boxing. The plan is to go over to Norfolk for some sparring with the Walshes (Liam and Ryan) who are slippery and emulate Mitch in size and strength, if not style.

‘I’ve already trained for three 10 rounders and I’ve always had a good engine so the distance and pace won’t be a problem. The focus has been more on fighting my fight not Mitchell’s.

‘Mitch and I sparred a few years back and I know that on my day, I can mix at that level. If I stick to my plan, I can upset him and that could open doors to massive things, really push my career on.’