Get set for another instalment of the fighting Furys

AS I MENTIONED yesterday, I strongly fancy Anthony Joshua to snatch a slice of the world heavyweight pie by toppling the IBF champion Charles Martin on Saturday night.

Such an outcome would see British boxing account for the majority of the world title straps in the division, with only Deontay Wilder’s WBC crown and the WBA regular version of the title currently in the possession, for now, of ‘Big Daddy’ Lucas Browne residing outside of the UK.

I am fully confident that we have another world heavyweight champion-in-waiting performing on our show at the Copper Box on April 30, one who has witnessed first-hand what it takes to reach the pinnacle of world boxing.

Hughie Fury returns on a BoxNation televised card, headed by Billy Joe Saunders’ first defence of his WBO world middleweight title against ‘Mad’ Max Bursak. We are currently in the process of finalising an opponent for Hughie in what will be a first title challenge for him. 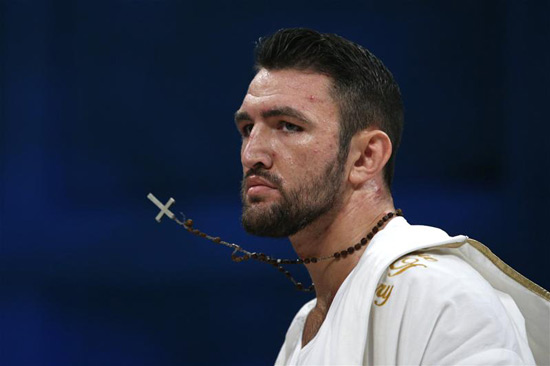 He will be in good company on the night, with Ovill McKenzie fighting for European honours against Dmytro Kucher, Ryan Walsh defending his British title against the big-punching James Tennyson and another recent signing Jamie Conlan attempting to seize the Commonwealth belt from Anthony Nelson.

Hughie is a quality fighter who has been learning his trade and doing it the right way under the watchful eye of his father and trainer Peter. He is just 21 years old and has already got 19 fights and 85 rounds under his belt, taking on a higher calibre of opposition – certainly more durable – than what has been put in front of Joshua to date.

For me, he is the stand-out heavyweight for his age, he is developing nicely and they are not rushing him. Having said that, Peter does not enter him into fights that he won’t learn from and he doesn’t get presented with too much in the way of easy pickings. He is serving a tough apprenticeship and we are delighted that he will continue this and take the next steps in front of the BoxNation cameras.

Hughie has the great advantage of picking up experience in his cousin Tyson’s training camps. They don’t cut any corners, they employ top-class sparring partners and he is now working with the world heavyweight champion.

Not that he is without a pedigree himself, winning gold for England at the World Youth Amateur championships in 2012. Hughie’s blossoming career is another exciting prospect for British boxing and I would like to see him in with the likes of Alexander Ustinov and Dereck Chisora before too long. They would be good fights for him.

IF HE IS true to his word, boxing will bid farewell to one of the greats this weekend after Manny Pacquiao touches gloves for what he says will be the final time against Timothy Bradley in the third act of their trilogy.

The Pacman – aside from some ill-advised recent comments – has been a fine ambassador for the sport and it would be fitting for him to make his exit with a win in his decider against Bradley but, for me, I suspect the younger man edges it.

This would not diminish Pacquiao’s legacy as he heads into the political arena in his native Phillipines, although many suspect a rematch with the ‘retired’ Floyd Mayweather might tempt him to prolong a career that has already spanned 65 fights.

I imagine his promoter Bob Arum would like to put the winner of Pacquiao-Bradley in with Terence Crawford, which should be enough to convince Pacquiao to stick with his retirement plans should it be his arm raised in victory at the weekend.

THE FLIP-SIDE to fine ambassadors such as Pacquiao is Adrien Broner, who once again devalued a world title contest by failing to make the weight ahead of his defence against the Brit Ashley Theophane last weekend.

He was rightly stripped of the right to defend his WBA super-lightweight title, but the fight went ahead and he lived up to his nickname in proving too much of a problem for Theophane to solve.

For me, Broner is not so much a problem, more of a nightmare. It is not fair for the promoters or the public with these guys keep coming overweight. If it was me, depending on the weight they come in, I would pull the fighter out as money is not compensation for everything. I think Broner is an awful, overhyped and overrated fighter who I haven’t rated from day one.

BACK TO QUALITY welterweights and we certainly have one in our ranks in the shape of Bradley Skeete, the now British and Commonwealth champion.

He is someone we need to move along quickly in the months ahead as he would be awkward for anyone and he is not far off elite level. By the end of the year I hope he will be fighting for a world title but, for now, it is a case of keeping him busy, which is what he needs.

After doing a job on Sam Eggington – who someone predicted was going to be the new Carl Froch – he has moved up the rankings and is rated at seven by the WBO and I predict big things ahead for one of boxing’s good guys.